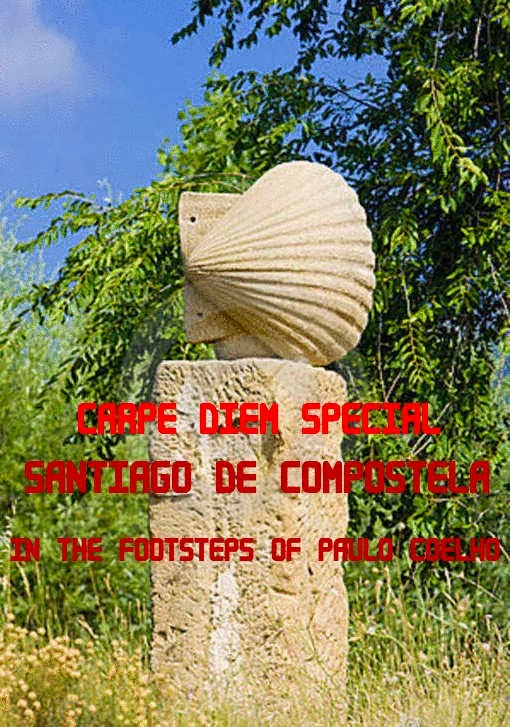 As we have entered a new month of Carpe Diem and went on our second part of the Shikoku Pilgrimage we will also go on throdding in the footsteps of Paulo Coelho as he is on his pilgrimage to Santiago De Compostela to find his sword which he lost as he performed the initiation ritual of The Tradition. He took his new sword in hand with greed and not with his spirit ... so he lost it immediately. To find his sword back, his goal in life, he went on the Camino or The Way of St. James together with his guide Petrus.
As we have entered this new Carpe Diem month we will pick up our Camino halfway ... and go on with this spiritual path, searching for the goals of our lives ...

As we catch up ... Paulo and Petrus have arrived at Puente de la Reina where all Roads to Santiago become one. Here it is that all pilgrims from all winds gather to walk on to Santiago De Compostela. From now on Petrus and Paulo will be accompanied by more pilgrims and Paulo will learn more lessons to find his sword back.

[...] "It was early in the morning when we reached Puente de la Reina, where the name of the village was etched into the base of a statue of a pilgrim in medieval garb: three-cornered hat, cape, scallop shells, and in his hand a shepherd’s crook. With a gourd – a memorial to the epic journey, now almost forgotten, that Petrus and I were reliving.'' [...] (Source: Paulo Coelho The Pilgrimage)

At Puente de la Reina the French Way (the Camino Frances) and the Aragonese Way (Camino Aregones), which is the follow up of the Arles Way across the Pyrenees from the French soil to the Spanish soil and follows mostly the Aragon River, come together and brings the pilgrims to eachother.

As Paulo and Petrus go on with their pilgrimage they encounter a group of youngsters playing football. For a while the observe them and on a moment the ball is kicked to Paulo who catches the ball and hold it for a while. As the youngsters are asking their ball back. Paulo don't want to give it back ... One of the boys threatens to throw a stone at him to get his ball back, but Paulo still resists giving it back. He only says: ''Throw that stone and I will get at you''. The boy doesn't throw the stone, but at that moment Paulo gets a vision of a desert. It lasts only for a few seconds and than he is back. He gives the ball to the boys and they go on their way again. As they are walking further Paulo tells Petrus what he saw and if he can tell him the meaning. Petrus looks at him and the only thing he says is: ''You have met your personal devil''.

With this Paulo is a little bit closer to his goal, but he doesn't understand that immediately.

crossing the country
dreaming of Santiago -
the cry of an eagle

With this haiku I end this Special episode of Carpe Diem and now it's up to you to write your haiku inspired on this post. You can submit your haiku tonight at 7.00 PM (CET). This episode is open for your submissions until March 5th 11.59 AM (CET) and I will publish our new episode, Iwaya-ji (temple 45), later on today.