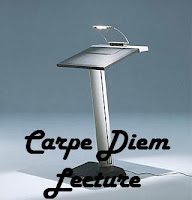 On a regular base I am getting questions about haiku. Siggi of Maine for example asked me 'Why do our classical haiku masters write their haiku in one vertical or horizontal line? In the Western world we write haiku in three sentences?

This Carpe Diem lecture will, hopefully, give answers to that question.

In classical Japan writing was on Vertical strips of rice paper, that's why our classical haiku masters wrote their haiku in one line.By the way the One-Line haiku is also called 'Monoku'. During the decennia this changed into a Horizontal way of writing more related to the Western way of writing, but the classics stayed on to write their haiku in one-line.
When haiku came to the Western world many scientist of literature said that haiku could be written in three lines. It was in 1973 that the 'Haiku Society of America' who set the tone for the way we are writing our haiku nowadays in three lines with respectively 5-7-5 syllables (a total of 17 syllables which is the same as the characters ('no') in the Japanese haiku). 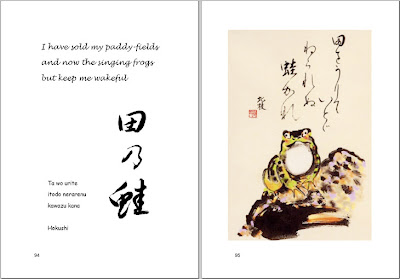 In the Western world there are several haiku-poets who are experimenting with the form of haiku, less syllables, less lines and so on. As you may know I write my haiku mostly with more or less than 17 syllables, which is called Kanshicho and was used several years by Basho.

In our Western world we have so called 'One-liners', for example a 'One-liner' by Kennedy when he was visiting Berlin "Ich bin ein Berliner", or what do you think of this 'One-liner': "I have a dream". This was said by Marten Luther King. So 'One-liners' aren't that strange in our Western world. So why do we write our haiku in three lines?
It's the Western custom for writing haiku as stated by the Haiku Society of America in 1973. So let us look to a few haiku written in both ways as the traditional 'One-Line' and as the Western 'Three-Line'.

Well let us look at a few haiku which I have read on several websites and a few of myself.


Thrown into the sea a pebble bounches a few times, I feel a giant.

This is a 'One-line' haiku. You can read it as one sentence. That's a 'rule' for 'One-Line' haiku,it has to be one sentence, So now I will give the haiku as we're used to write it in the Western world:

Another example written by our haiku master of next month Kyoshi Takahama (1874-1958):

This is the traditional way of writing haiku in one horizontal or vertical line and as follows the way how we would write it in our Western world.

Great showers are coming---
Mt.Yuhu has been covered
With dark clouds

Great showers are coming, Mt.Yuhu has been covered with dark clouds.

Is this readable as one sentence? I think so.

A last example, another haiku by Matsuo Basho (my haiku-master), his very famous 'Old Pond'- haiku:

An old pond, a frog jumps in, the sound of water.

Can we read this as one sentence? Yes we can ('yes we can' THE 'one-liner' by Obama!':-)). And this haiku written in the Western way looks awesome too.

an old pond
a frog jumps in
the sound of water

It's not quite as the Haiku Society of America would like to see it, but well ... let say that this is a haiku in Kanshicho-style, based on a style used by Basho from 1683-1685 in which the syllables count wasn't important.