This month we are on a journey through the Tarot-cards deck and I am on a quest to share my knowledge of the ancient scriptures and to show you all that the Tarot is not only occult, but also divine.
As I started this month I wasn't aware of the 'struggle' and time that preparing the different episodes brings with it, but I enjoy it a lot.
As we go on with the drawing of the cards we now have drawn the card of The Hierophant (V) (also known as The Pope or Jupiter). With this card we have had the first five (excluding The Fool (0)) major and most important cards of the Tarot on which my idea of the divine Tarot is stated, because these five cards are synonymous with the 'stigmata' , the five wounds of Christ after He was crucified (both hands, both feet and His side).


sign of the Redeemer
five, and not four, wounds -
stigmata

The Hierophant (or The Pope) is part of Tifareth, the sixth sephira in the heart of the Kabbalah glyph 'Tree of Life' ... that's where Christ consciousness is based, so we can say that The Hierophant is synonymous with Christ, the Son of God.
In times that this card was called The Pope it referred to the Leader of the Roman Catholic Church, the substitute of Saint Peter, the right-hand of Christ, and the one who denied him. As The Pope this card was placed in Kether (The Crown) the first sephira, next to The Fool. As we saw in the episode of The Fool, he (The Fool) was also part of Tifareth and synonymous with Christ Consciousness.


Here we see a contradiction, because The Fool, does know nothing and therefore he's wise. The Pope knows a lot, but therefore isn't wise. He (The Pope) needs not to learn more in his thoughts. The Fool however is always searching for knowledge and wisdom ... he walks with eyes open into the world without asking why and how.
In several Tarot explanations the search for knowledge of The Fool is which binds the cards together. Therefore, the stream, the water as stated as binder of the cards in the episode of The Highpriestess is similar to the quest for wisdom. So water, the stream, is life giving and opens the mind for wisdom.


OK ... back to our card for today The Hierophant (V). Earlier in this episode I stated that the first five cards (excluding The Fool) are synonymous with the 'Stigmata' and this I based on:

Let us look closer to the depiction of The Hierophant on the Tarot card of the R.W.-Tarot deck: 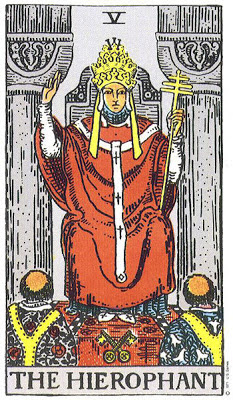 He is depicted with his right hand raised as a sign of benediction with two fingers pointed skyward and two pointed down, thus forming a bridge between Heaven and Earth as in "so above, so below". The Hierophant is therefore the builder of the bridge between deity and humanity. He is seated on a throne between the pillars of Law and Liberty, or obedience and disobedience. He wears a triple crown and the Keys to Heaven at his feet. So depicting his power. In front of him are worshippers, humankind.
The two pillars, Joachin and Boaz, we have seen also besides The Highpriestess. These pillars we see also in the Kabbalistic glyph, the Tree of Life. The right pillar is of Mercy and the left pillar is of Severity. Both pillars have meaning in prayer, as do the fingers of The Hierophant's right hand. The two pointed skywards are for Severity which stimulates praying and Mercy, the two pointed down, which blesses.

This refers to the Lord's Prayer (Matthew 6: 9-13), which, I think, you all know. The two pillars beside The Hierophant, Prayer and Benediction are connected through the words of the Christ in the beautitudes of the Sermon on the Mount (Matthew 5: 3-12).

It was a joy to dig into the ancient scriptures and I hope that this episode will inspire you to write new haiku. This prompt will stay on 'till May 9th 11.59 AM (CET) and I will draw our next card, The Lovers (VI), later on today around 10,00 PM (CET).