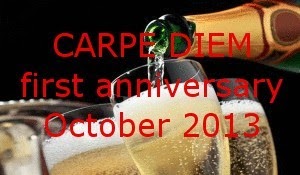 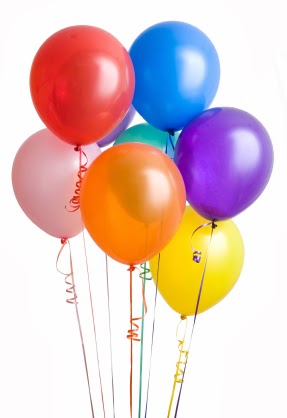 Welcome at Carpe Diem Haiku Kai, a daily haiku meme. Today our first anniversary starts to be celebrated. A year ago I started Carpe Diem to share and promote haiku, a Japanese form of poetry. I am a big fan of haiku and since the late eighties I have started to write haiku myself. Haiku is a short poem of three lines with 5-7-5 syllables (the classical way of haiku writing) and tells about a moment as short as the sound of a pebble thrown in water.
As I started Carpe Diem October 2012 I hadn't dreamed that I could celebrate my first anniversary, but here I am, here WE are, a group "Kai" of haiku-poets "Haijin" still alive and kicking. I have seen this Kai grow and I have seen how all our contributors have grown in their way of haiku writing. I am proud and humble that I may and can say that Carpe Diem Haiku Kai has become a family, a community of haiku poets who write and share their haiku with the Kai and with the world.
I am glad that I can say: "Let's start a whole new year of haiku writing at Carpe Diem Haiku Kai". I hope to see again wonderful haiku and of course I hope that this second year of Carpe Diem will be even better then the first year.
In our anniversary month I have prepared a prompt-list with mostly prompts suggested by you all my dear Haijin, visitors and travelers. So this month is really a festive month, because we all have a part in the prompt-list. The 'kick-off' is a prompt by Bjorn Rudberg

Today we share haiku on Eclipse. I am sure you all know what I am talking about here, so I don't have to explain what it is. We have Sun- and Moon-eclipses and they occur on a irregular base through the centuries.
Around the world, in every country or culture (ancient or modern) there are all kinds of Myths and Legends around eclipses, because of our roots of haiku I love to share a few of those Myths and Legends from Japan.


Ancient Chinese also believed that a celestial dragon ate up the sun, during solar eclipse. To scare away the dragon, they used to bang drums and pots and make loud noises. They even tried to scare the dragon by shooting arrows. They used do the same thing when lunar eclipses occurred.

The Shintos in Japan used to place a talisman - a precious stone studded necklace - on the branches of the scared Clauria tree. The brilliance of these stones was thought to compensate for the amount of sunlight lost during eclipse. At some places bonfires were lit as a substitute for the talisman.

Another great Myth of Japan about eclipse is the next one it's about the Japanese Shinto Goddess of the Sun, Amaterasu:

Amaterasu is a sun goddess of the Shinto religion. It is believed that Amaterasu sent her grandson Jimmu to Earth 3,000 years ago to be the first ruler of Japan, beginning the divine family of Japanese emperors.
Amaterasu was given rule over the sky by Izangi when he handed to her his holy necklace.
Later, in a competition with her brother Susano, Amaterasu gave birth to three goddesses, who with Susano's offspring, are collectively the ancestors of Jimmu.
During this competition, Amaterasu was unwilling to admit defeat. This caused Susano to furiously wreak havoc throughout the heavens and the Earth. Amaterasu fled into a cave, and her absence caused darkness throughout Japan.
Amaterasu's absence caused much dismay on Earth. As the crops died off and the people suffered, the gods decided they needed to return Amaterasu to her position in the heavens. They sought the help of several dieties, and performed ritualis and sacrifieces outside of Amaterasu's cave. They also hung a mirror from a tree outside of the cave.
Hearing all the commotion, Amaterasu came forth and asked why the gods seemed to be rejoicing. They replied that they had found a new mistress who would be the sun goddess' replacement. Amaterasu came forth in curiosity, and peeked out of her cave. She immediately saw the mirror and was drawn to it. Having never seen her own reflection, Amaterasu thought she was looking at her majestic replacement. As she stepped forward to examine it, she was caught by one god and the cave was blocked by another. Amaterasu's presence illuminated the fields and life returned to Japan's land.

I found a nice video on You Tube about this Myth:

It's in short the Myth which I described above. Eclipse ... a wonderful prompt and I thank Bjorn for providing this one for our Carpe Diem Haiku Kai first anniversary month.

I found a nice haiku written by Kobayashi Issa, one of the four greatest haiku-poets, about a lunar-eclipse which occurred in 1819 as it was Harvest Moon (the full moon of September, or the 8th Lunar-cycle):

as one would expect...
harvest moon

Or this one, not a wellknown haiku, by Matsuo Basho:

All wonderful haiku on eclipse, and that ... my dear Haijin, visitors and travelers is the task for today ... write a haiku about eclipse (which one you are free to choose it's lunar- or sun eclipse).

I like this one ... it's a joy to write haiku and of course I am looking forward to your haiku inspired on Eclipse. This prompt will stay on 'till October 2nd 11.59 AM (CET) and I will post our next episode around 7.00 PM (CET), that will be: Stonehenge provided by Managua Gunn. Have fun, be inspired and share. This episode is now open for your submissions.