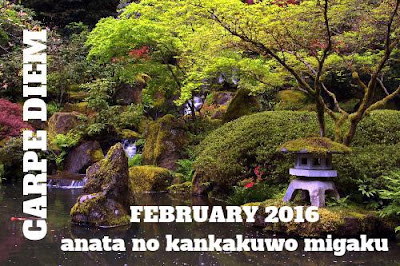 Welcome at a new month of Carpe Diem Haiku Kai. This month its all about senses. As you all know there are five senses (and sometimes people have a 6th sense), but as we will see this month we have more than five senses.
This month its all about sharpen the senses or anata no kankakuwo migaku and our prompt-list has been created by one of our CDHK family-members, Hamish Managua Gunn (a.k.a. Pirate). Hamish has provided me with a wonderful prompt-list and he also provided me with his notes about all the prompts this month.
February will be a little bit different than we are used to. I will write a short introduction for every prompt and than I will share Hamish' notes with you. So let me start with the first introduction of February.

This month its all about the senses as you all know we have five senses (hearing, touching, seeing, smelling and tasting), but this month we will explore several other senses. As I started with this introduction there was immediately a haiku which I had to share here in which "hearing" is the theme. I think you will remember this haiku, because I used it not so long ago.

seven views
hidden in the mist -
the (temple) bell of Mii

This haiku was a kind of bet which Basho accepted and it's about the Eight Views of Omi and the bet was to catch all those views in one haiku. Basho succeeded, as we can read in the above haiku, but in this haiku we also see "hearing" in the last line the (temple) bell of Mii. Basho refers here to the sound of the temple bell of Mii.

I love to share an oldie by myself here also with "hearing" in it:

wedding bells sound
through the autumn haze
early this morning

A nice "oldie" I would say in which we can see "hearing" in the first line wedding bells sound.

Those who work with people who are blind, or deaf, or mute report consistently that whereas blind people are often to be admired for their peace of mind, deaf people are often frustrated and tense. Why is this so?  Perhaps sounds are the most beautiful and important sense in our lives, maybe, just maybe even more important than sight. Hearing allows us to communicate with each other by receiving sounds and interpreting speech, as well as listening to wonderful music and communing with nature's many soft sounds. Hearing loss means a certain kind of loneliness when among people.
A sense of hearing can be divided simply into two separate categories: listening, and hearing. Listening is, of course, voluntary, but hearing is not. When we listen to a Beethoven concerto, we are consciously listening to it, but when a baby hears sounds, the baby's mind processes these sounds subconsciously into language. In a somewhat similar way to when you hear a car beep its horn and you automatically jump back, without analyzing the situation, and even when you do not see the car.
Animals like bats, porpoises, dolphins and whales have the ability to determine orientation to other objects through interpretation of reflected sound (like sonar). They most often use this to navigate through poor conditions or to identify and track prey. Blind people report they are able to navigate and in some cases identify an object by interpreting reflected sounds (especially their own footsteps), a phenomenon known as human echolocation.
Your haiku today should include 'sound' in it. Let us hear your haiku!

creaking doors
this old mansion is alive
the Sakura* blooms


* A kind of Cherry tree


Another one picked from my archives:

scared butterfly
flies in from far away
temple bell - dreams

The above (cascading) haiku was inspired on a haiku by Yosa Buson (1716-1784):
tsuriganeni tomarite nemuru kochoukana

on a temple bell
alights and naps
a butterfly

I hope you did like this first episode of February in which we will sharpen our senses together with Hamish Managua Gunn.

This episode is OPEN for your submissions tonight at 7.00 PM (CET) and will remain open until February 3rd at noon (CET). I will (try to) publish our next episode, sweetness, later on. For now ... have fun, be inspired and share your haiku (or tanka) with us all here at our Haiku Kai.