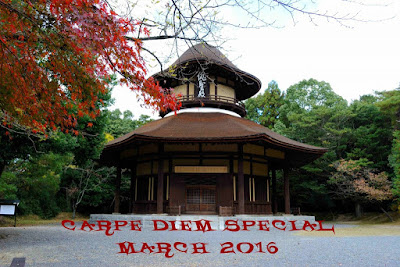 First this: Last night my dad became very ill and became hospitalized. He is on the ICU set on the respirator. He has a severe pneumonia. The next 48 hours are very critical and we hope that he will survive this.

This CD-Special is a little later than planned, but as you know I am in the nightshift and hadn't time to create this episode on time.
This month all our CD-Specials are about Basho's ten most close disciples, also know as the Shoomon Basho. In this episode I love to introduce to you Shida Yaba (1662-1740).

Yaba was 79 when he died. He was born in Echizen, Fukui. His name was Shida Yaba and his nickname Yasuke or Hanjiro. At a young age he left for Edo to work with the money changer Mitsui EchigoYa. He climbed to success as their head clark.
His name in the haiku world, Yaba was first mentioned in 1687.His style was that of karumi (lightness.) He also used the name of Chobokusha or Choshi. He studied haiku first with Kikaku, later with Basho himself.
Later in his life after the death of Basho, Yaba settled in Osaka since 1704. During a great fire in 1724 he lost all his possessions and moved to a hermitage in Takatsu. It is said he had more than 1000 students, from Western Japan, Central Japan and Shikoku.
His most important disciple is: Tagaan Fuuritsu (1698 - 1781), a salt merchant from Hiroshima.
Remembering Basho
asajimo ya shi no sune omou yuki no kure
morning frost -
I think of the shins of my master
on a night with snow

© Yaba
It’s known that Yaba and Basho had a very warm and close contact.  There is a letter from Basho to Yaba, written during his trip "Oku no Hosomichi", which was found in 1997.


. uguisu ya mochi ni fun suru en no saki .
Ah! the uguisu
Pooped on the rice-cakes
On the verandah.
© Basho (Tr. Peipei-Qiu)
Bashô’s verse breaks drastically with the convention and discovers poetry in the natural and the low. The master’s new poetic ideal in this poem had a deep impact on his disciples, as Yaba wrote:
"I am utterly impressed by the exceptionally wonderful combination of the warbler and the rice cake. I don’t think one can find any other verse like this. The effect cannot be achieved without the words “excreting on a rice cake.” The juxtaposition is so magically marvelous that it can only be compared to the masterpiece of the Natural. There may be more combinations like the warbler and rice cake later, but we will never see a line like “excreting on a rice cake.” In these words lies the soul of the poem." (source : Basho-and-the-Dao - Peipei-Qiu )
Ï have to admit that I had never heard about Yaba until I did my research for this CD-Special. It's really awesome to read an actual response of one of Basho's disciples on a haiku written by the master himself. I was excited as I read this at the website of Gabi Greve.

Especially the idea that Yaba's haiku writing style is mentioned as "karumi" (lightness) and that's one of the haiku writing techniques which Basho used also and which we will see in the last regular episode of this month.

I found a nice haiku composed by Yozakura, also a disciple of Basho, in which I read the same intensity as in the haiku by Yaba.


feeling alone
lost in the woods around Edo –
just the autumn wind
© Yozakura
It's even possible that Yozakura this one wrote when he heard of Basho's death, there is however no "evidence" for that idea.

a gust of wind
a hat tolls around and around -
camellia flower
© Chèvrefeuille
I am looking forward to your responses on this episode in which I introduced you to Shida Yaba, one of Basho's Shoomon disciples.

This episode is NOW OPEN for your submissions and will remain open until April 1st at noon (CET). I will try to publish our new episode, rice gourd, later on. For now ... have fun, be inspired and share.