Let's go on with discovering the deeper meaning of our mysterious and beautiful nature. Today I love to tell you something more about Vine another beautiful piece of Mother Earth's heritage. We, as haiku poets, are all very much in tune with nature and maybe we are the poets who can honor Mother Nature in as few words as possible. Something to be proud.


The vine is a theme repeated over and over in Celtic art. Interconnections and winding vines are commonly seen on tapestries, writings, knot work and carvings. This indicates the symbolism of connection, eternity, and diversity (branching and expanding in new directions).
In Celtic mystical druidism the Ogham was very important and Vine is part of Ogham, mostly the druids referred to the Blackberry when they talked about Vine:


Other symbolic associations of the vine in Celtic wisdom include the following:

The druids classified anything with a woody stalk as a tree, and so therefore it is listed vines among the sacred Ogham ranks. In the Druid perspective, the vine earned its symbolism from its growth patterns.They recognized the vine grows opportunistically, and would dig in wherever feasible in order to gain a strong foothold to assure its own growth.
This is a powerful metaphor of "going with the flow" or "growing where you are planted."
In other words, it is a message that when we observe the best of our environment/situation and stay in a relaxed, flowing state of mind, will likely gain our highest advantage.
Nevertheless, in spite of the philosophical urgings to take things as they may come, the thorns of these vines are symbolic of defending or protecting ourselves when necessary.
By the way: In Celtic art the Vine is used often an example of a piece of art hereafter. 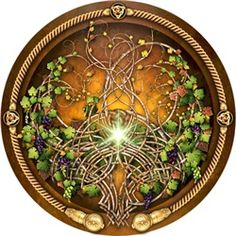 The ever-watchful Celts also recognized the vine's predominant growth formation is in the shape of a spiral. This has long been considered a sacred symbol for:

It's a very beautiful part of nature, not only because of how it looks, but also because of the taste of the berries.

I hope I have inspired you.

This episode is open for your submissions tonight at 7.00 PM (CET) and will remain open until July 19th at noon (CET). I will (try to) post our new episode, Ivy, later on. For now .... have fun!