Carpe Diem #1132 ‘The wrong answer will indicate the right one.’ (Petrus)

We are almost at the goal of our pilgrimage of this month, Santiago De Compostela. We have walked the Road together with Paulo and his guide Petrus while we were reading "The Pilgrimage". During our walk we learned a few exercises, and maybe just as Paulo did, we don't see or know the purpose of these exercises, but than ... there is this situation, a problem to resolve or something and finally we see the purpose of these exercises.

While Paulo and Petrus are on their way they encounter a sacred cross that has broken and fallen. Paulo shakes his head, but doesn't do anything to resolve this. Petrus however commands him to repair the cross. And than Paulo experiences in a spiritual way what the Saviour has felt.

[...] ‘The wrong answer will indicate the right one.’ The impossible solution would be to try to drag the cross to a different place; I no longer had the strength to do that. It was also impossible to try digging deeper into the ground. So if the impossible answer was to go deeper into the earth, the possible answer was to raise the earth. But how?
And suddenly … I could raise the earth!
I began to collect all the stones nearby and placed them around the hole, mixing them with the earth I had removed. With great effort, I lifted the foot of the cross a little and supported it with stones to raise it higher off the ground. In half an hour, the ground was higher, and the hole was deep enough.  Now I just had to get the cross into the hole. It was the last step, and I had to make it work. One of my hands was numb, and the other was giving me a great deal of pain. My arms were wrapped in bandages. But my back was all right; it had just a few scratches. If I could lie down beneath the cross and raise it bit by bit, I would be able to slide it into the hole.
I stretched out on the ground, feeling the dust in my nose and eyes. With the hand that was numb, I raised the cross a fraction and slid underneath it. Carefully, I adjusted my position so that its trunk rested squarely on my back. I felt its weight and knew that it would be heavy to lift but not impossible. I thought about the Seed Exercise, and very slowly I squirmed into a fetal position, balancing the cross on my back. Several times I thought it was going to fall, but I was working slowly; I was able to sense the direction it might take and correct for it by repositioning my body. I finally achieved the position I wanted, with my knees in front of me and the cross balanced. For a moment, the foot of the cross shook on the pile of stones, but it did not fall out of place.

‘It’s a good thing I don’t have to save the universe,’ I thought, oppressed by the weight of the cross and everything it represented. A profoundly religious feeling took possession of me. I remembered that another person had carried the cross on his shoulders and that his damaged hands had not been able to free themselves from the wood or the pain as mine could. This religious feeling was loaded down with pain, but I forgot about it immediately because the cross began to shake again.
Then, slowly raising myself up, I began a rebirth. I couldn’t look behind me, and sound was my only means of orientation. But just a while ago I had learned how to listen to the world, as if Petrus had guessed that I was going to need this kind of knowledge. I felt the weight of the cross and sensed that the stones were accommodating each other. The cross rose bit by bit, as if to help me in this test. It was as if the cross, itself, wanted to return to its position, framing that section of the Road to Santiago.
One final push was all that was needed. If I could get into a seated position, the trunk of the cross would slide down my back into the hole. One or two of the stones had been dislodged, but the cross was now helping me, since its foot remained in place where I had built up the wall. Finally, a pull on my back indicated that the base was free. It was the final moment, just as at the waterfall when I had had to fight my way through the current: the most difficult moment, because it is then that we fear failure and want to give up before it occurs. Once again I sensed how absurd the task was, trying to raise a cross when all I really wanted to do was find my sword. But none of these thoughts was important. With a sudden thrust, I raised my back, and  the cross slid into place. At that moment I recognized once again that fate had been directing the work I had done.
I stood there expecting the cross to fall in the other direction, scattering the stones I had placed. Then I thought that maybe my push had not been strong enough and that the cross was going to fall back on top of me. But what I heard was the muffled sound of something hitting against the bottom of the hole.
I turned carefully. The cross was upright, and it was still trembling from the impact. Some stones were rolling down their slope, but the cross was not going to fall. I quickly put the stones back in place and embraced  the cross so that it would stop wavering. I felt alive and hot, certain that the cross had been my friend throughout all of my work. I stepped away slowly, improving the placement of the stones with my feet. I stood there admiring my work for a long time, until my wounds began to hurt. Petrus was still asleep. I went over to him and nudged him with my foot. He awoke with a start and looked at the cross. ‘Very good,’ was all that he said." [...] (Source: The Pilghrimage by Paulo Coelho) 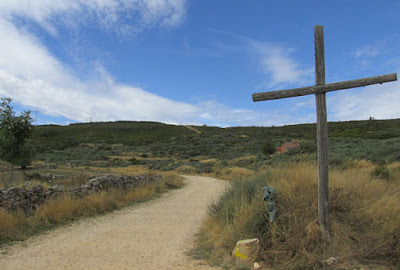 In this piece from The Pilgrimage we read that Paulo uses the Seed Exercise to bring the cross in an upright position. Sometimes we need such an impossible situation to learn how to cope with it. Than we will remember that what we need to accomplish it.

In a way you can compare this with what is know as the impossible question, the koan, which we all will know, because of the fact that haiku (and tanka) can be such a koan, an impossible question that cannot be answered except through an "aha-erlebnis", a moment of clarity of mind.

The Road to Santiago ... it's a beautiful road to walk, but it certainly isn't an easy road ... It will "torture" you, but it also will "surprise" you. The nature along the Road is breathtaking and the hospitality of the people along the Road is legendary ... yes it is an once in your lifetime experience and I hope you have felt this during this month.

along the road
poppies start blooming again -
the scent of straw


This episode is NOW OPEN for your submissions and will remain open until January 27th at noon (CET).