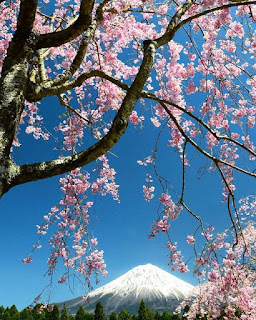 through the branches
of blooming Sakura trees
I see Fuji

Today I love to take you on a trip along the beauty of Cherry Blossom, not only through haiku and texts, but also with beautiful images of Japanese Cherry Trees.

Let me first tell you al little bit more about the national pride of Japan ... the Sakura.

They are swooned over during picnics. They are painstakingly painted. They are obsessed over in poems. They are cited as a symbol of the transient nature of life. And they are sprinkled on Starbucks lattes.

Welcome to Japan’s pink and modern world of cherry blossoms. It is impossible to think of springtime Japan without an iconic image of a sea of cherry trees awash with perfect pink blooms instantly coming to mind.
As well as leading the way in robotics, sushi and skyscraper technology, the Japanese have long been celebrated as global leaders in the art of cherry blossom appreciation. From as early as the eighth century, elite imperial courtiers paused to appreciate the delicate pink cherry blossoms known as sakura before indulging in picnics and poetry sessions beneath the blooms. Fast-forward more than a millennium and the flowers that launched a thousand haiku are no less revered in modern-day Japan.

Today, as spring approaches, the entire nation turns a shade of pink. Months before they arrive, retailers switch into sakura mode – cue supermarkets filled with plastic cherry blossom flowers and cherry blossom-flavored innovations in convenience stores. The countdown excitement is heightened further by the televised Cherry Blossom Forecast which offers a petal-by-petal analysis of the advance of the blooms – known as the cherry blossom front – as they sweep from the south to the north of the archipelago.
When the blooms actually arrive (as confirmed by teams of meticulous cherry blossom officials), it is time to indulge in one of the nation’s all-time favorite pastimes – hanami, which literally translates as “looking as flowers” and refers to flower appreciation picnics under the blooms.

Every year, a microcosm of society – from salary men and students to housewives and grannies – takes part in hanami picnics (some civilized, some rowdy) in every corner of the country.
The nation’s deep-rooted attachment to cherry blossoms goes far beyond buying a pink fizzy drink at 7-Eleven.
The flowers are deeply symbolic: their short-lived existence taps into a long-held appreciation of the beauty of the fleeting nature of life, as echoed across the nation’s cultural heritage, from tea ceremonies to wabi sabi ceramics. The blossoms also, quite literally, symbolize new beginnings, with April 1 being the first day of both the financial and academic year in Japan. 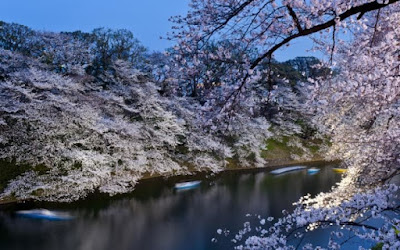 cherry blossoms
looking so fragile in the moonlight -
ah! the spring breeze

such sadness
the spring wind has molested
cherry blossoms

In a nutshell? The cherry blossoms are not just pretty pink flowers: they are the floral embodiment of Japan’s most deep-rooted cultural and philosophical beliefs.

The nation prides itself on its devotion to the important task of forecasting the exact arrival of the first cherry blossoms. Since 1951, teams of meteorologists have been dispatched to monitor the advance of the cherry blossom front – sakura zensen in Japanese – as they burst into bloom across the country.
Officials traditionally observe the pale pink blooms of the yoshino cherry tree – Japan’s most common type – with the season declared open when at least five or six flowers have opened on a sample tree in any given area.

The flowers only bloom for around a week before the so-called “sakura snow” effect starts and they float sadly off the trees.

The first blossoms generally appear in Okinawa in January and slowly move up the archipelago, passing through Japan’s central islands (including Kyoto and Tokyo) in late March and early April, before progressing further north and hitting Hokkaido in early May.

Of course I cannot leave without a few haiku by the classical masters, for example this one by Issa:

The part of Japan were Issa lived knows long winters and late springs, so sometimes the cherry blossoms started to bloom in June.

Or what do you think of this one by my master, Matsuo Basho:

how many, many things
they bring to mind —
cherry blossoms!

[...] "Instilled in the Japanese mind is the association of the ephemerality of the cherry blossoms with the brevity of human life. Blooming for so short a time, and then casting loose in a shower of lovely petals in the early April wind, cherry blossoms symbolize an attitude of nonattachment much admired in Japanese culture." [...] (Source: A Zen Wave,Basho's Haiku & Zen  by Robert Aitken Published by Weatherhill, NY in 1996)

And another one by Buson:

these tired old legs -
is it for them that we stop,
or the late cherry blossoms?

And to end this episode with I have another nice haiku master who wrote about the cherry blossoms:

double cherry blossoms
flutter in the wind
one petal after another

And another one by a not so well known classical haiku poet, Onitsura:

the wild cherry:
stones also are singing their songs
in the valley stream

Of course I can go on with this wonderful episode, but it must be fun to read and therefore I try to make the episodes not that big, but in this case ...


cherry blossom viewing
together with friends and family
celebrating spring

blossom haze -
walking in the middle
of falling petals

Ah! those cherries
have to let go their blossoms -
blossom haze

the cooing of pigeons
between blooming cherry trees -
the cool rain*

* written for the Vancouver Cherry Blossom Festival 2012, I won a honorable mention.

© Chèvrefeuille
And to really conclude this episode I love to share a "twin-tanka" about Cherry Blossom:

on gusts of wind
cherry blossom petals, full circle,
the taste of cherries
helping me through the cold winter
Sakura blooms again

Well ... this episode became a little longer than I had thought, but I hope it will inspire you to create haiku, tanka or other Japanese poetry form. Have fun!

This episode is open for your submissions tonight at 7.00 PM (CET) and will remain open until February 22nd at noon (CET).