This week I had some trouble to getting an idea for this Namasté episode, but after a while I thought maybe I can do something on Zen Buddhism, because that's one of the pillars for a classical haiku. Maybe this will episode will give you an idea how to bring spirituality into you haiku. As you all know (maybe) next month, April, I will have all classical (maybe sometimes modern) kigo (seasonwords) for spring, also a pillar of haiku. April will be in total classical, because I hope to challenge you to create haiku and tanka based on the classical rules. (These classical rules you can find in our exclusive e-book "In The Way of Basho" above in the menu).

Let me take you "by the hand", let's go find out what haiku and spirituality have to do with each other.

Maybe you remember that we have had a series here at CDHK about "Zen in haiku", based on the "bible" of  haiku, the four volumes "Haiku" by R.H.Blyth.

To start with I have a haiku in which one of the most important issues of Zen Buddhism, Emptiness, is mentioned and with that haiku I hope to start this episode of Namasté and bring it to a great end.

This is the "heart" of haiku .... emptiness .... based on the ideas and thoughts of Zen Buddhism, but in haiku it's not only "emptiness" it is also "selflessness", "loneliness", "wordlessness", "simplicity" and "grateful acceptance". And of course there will be more to say, but that is not possible in the shallowness of this episode ...

Last week I brought the idea of "emptiness" already towards you all, so I think this is a clear thought already. So let us take a look at the other things mentioned here. First "selflessness" ... What is selflessness? It is a condition in which things are seen without reference to profit or loss, even of some remote, spiritual kind.
If you start writing haiku the first thing that will be said to you is "don't personalize your haiku, the poet has no place in your haiku, it's only nature". Maybe you have heard that when you started to create haiku. But in my opinion the haiku I create are me, in my haiku I am always present, because I am the poet who has crafted it. Haiku is a nice way to say things as you feel them and sometimes you need to bring yourself into the haiku (or tanka).

And than "loneliness". What is loneliness? I think you all know that, but as Zen explains it: Loneliness is the underlying rhythm of thought rather than the thought itself. Loneliness we can bring into our haiku, an example:

Or this one crafted by Buson, one of the "big five":

an autumn eve;
there is joy too,
in loneliness

There is need to use words for haiku and tanka, for all kinds of poetry and other writing skills. Without words we don't create, but "wordlessness" is also one of the pillars of the classical haiku, but how can that be?
What does "wordlessness" mean in Zen Buddhism? Zen is essentially a wordless state, in which words are used, not to express anything, but rather to clear away something that seems to stand between us and the real things which are then perceived by self-knowledge.

Or as Thoreau says at the end of Walden:

"The volatile truth of our words should continually betray the inadequacy of the residual statement. Their truth is instantly translated; its literal monument alone remains."

this evening, ... the happiness,
while I washed my feet, ...
those two or three words

There are times when words lose their own power and serve us in humility and truth, when our thoughts peacefully arrange themselves in conformity with the order of things. 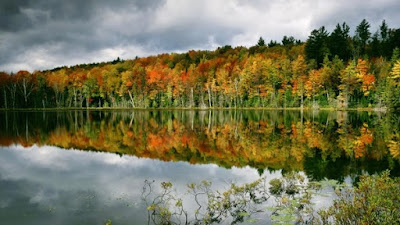 Zen has an extreme simplicity, and the  volubility of the Japanese language has been completely overcome in haiku. When we say "Eastern Thought", meaning the manner of apprehending the world by Japanese, Chinese, Koreans and Indians, we refer to a unity of Chinese practicality, Japanese simplicity and plainness, Korean independence, and Indian non-ego-ness. That's simplicity. Isn't that what we are trying to do in our haiku and tanka? Trying to say, describe, a scene in its most naked form, in its most simple way .... isn't that what we do?

For example this haiku by Basho, my master:

That simple it is. Basho describes just what happened ... that horse eating. Or this one ... also just a description of the scene as it is:

That is what it is, every day again ... that is simplicity. We are all wonderful haiku and tanka poets, let us be grateful for all what nature gives us ... the Earth herself and all that is on, in and above it provides us with the scenery to use in our haiku or tanka ... just that simple ...

Well ... enough to mediate and contemplate I think. Have a great weekend.

This Namasté episode is open for your submissions on Sunday April 2nd at 7.00 PM (CET) and will remain open until April 7th at noon (CET). I will publish our new episode, the first prompt of April, a classical kigo, also on Sunday April 2nd around 7.00 PM (CET). For now ... have a great weekend and I hope I have inspired you to create haiku, tanka or other Japanese poetry forms.