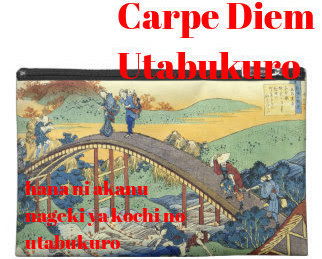 Welcome at a new "weekend-meditation". This weekend I have an Utabukuro episode for you in which I ask you to share one of your favorite haiku or tanka and to write an all new haiku or tanka inspired on it. Last Monday August 21st there was a total eclipse of the sun that was only visible in the US. I followed this eclipse online and was again amazed by it. It's a wonderful phenomenon almost magical. In ancient times eclipses were signs of the gods, and humankind was very afraid for it. Especially in cultures like the Maya who worshiped the sun it was an ordeal. Of course nowadays we know that it is just a natural phenomenon, but it is an intrigued phenomenon. Even now we see all kinds of ideas and thoughts when an eclipse occurs. For the eclipse of August 21st that was also true. there are groups, religions and other spiritual groups that say that this total eclipse, only visible in the US will have a major impact on the US people. They say this will change America ... so ... let's see what is going to change in the upcoming time.

For this episode of Utabukuro I have chosen a wonderful haiku by Basho in which he describes the mystery of a total eclipse, but before that I love to share a Japanese legend/myth about the sun eclipse.


Amaterasu is the sun goddess of the Shinto religion. It is believed that Amaterasu sent her grandson Jimmu to Earth 3,000 years ago to be the first ruler of Japan, beginning the divine family of Japanese emperors.

Amaterasu was given rule over the sky by Izangi when he handed to her his holy necklace.
Later, in a competition with her brother Susano, Amaterasu gave birth to three goddesses, who with Susano's offspring, are collectively the ancestors of Jimmu.
During this competition, Amaterasu was unwilling to admit defeat. This caused Susano to furiously wreak havoc throughout the heavens and the Earth. Amaterasu fled into a cave, and her absence caused darkness throughout Japan.
Amaterasu's absence caused much dismay on Earth. As the crops died off and the people suffered, the gods decided they needed to return Amaterasu to her position in the heavens. They sought the help of several deities, and performed rituals and sacrifices outside of Amaterasu's cave. They also hung a mirror from a tree outside of the cave.
Hearing all the commotion, Amaterasu came forth and asked why the gods seemed to be rejoicing. They replied that they had found a new mistress who would be the sun goddess' replacement. Amaterasu came forth in curiosity, and peeked out of her cave. She immediately saw the mirror and was drawn to it. Having never seen her own reflection, Amaterasu thought she was looking at her majestic replacement. As she stepped forward to examine it, she was caught by one god and the cave was blocked by another. Amaterasu's presence illuminated the fields and life returned to Japan's land.

A wonderful story ... I like the Japanese mythology and this is a very nice piece of it.

As I was preparing this episode I realized myself that this sounded very familiar, so I ran through th archives of CDHK and found another episode with almost the same theme. That episode was part of our first anniversary month back in 2013. Sorry ... for the replay, but a lot of you weren't part of CDHK at that time, so I hope you will forgive me.

For this episode I found two nice haiku, one by Issa and one by Basho. The one by Basho is my favorite, but maybe that's because of the fact that his haiku about the sun eclipse isn't a  well known one. Of course you may choose your own favorite. That can be a haiku or tanka by a classical or non-classical haiku-poet or even one by yourself.

Here is the one by Issa:

This haiku is about a lunar-eclipse which occurred in 1819 as it was Harvest Moon (the full moon of September, or the 8th Lunar-cycle):

eclipsed splendidly
as one would expect...
harvest moon

And here is the one, my favorite, my Basho (my sensei):


And here is my humble offering for this episode of Utabukuro, two haiku themed eclipse:

amidst the day
disastrous twilight falls
the world in fear

Well ... a lot to think about and to meditate on. So I wish you all a wonderful weekend and I am looking forward to your responses. This Utabukuro episode is open for your submissions next Sunday August 27th at 7:00 PM (CET) and will remain open until September 3rd at noon (CET). Have fun!