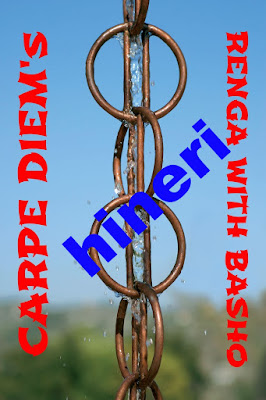 Welcome at a new episode of Renga With Basho. This time I have another Renga With Basho Hineri (with a twist) for you. Matsuo Basho (1644-1694) one of the most famous classical haiku poets has written a lot of haiku during his lifetime (around 1000 haiku). All wonderful but there is one haiku written by him that isn't finished, the third line is missing. If that haiku wasn't really finshed or that third line has been lost we don't know, but that unfinished haiku gives us the opportunity to be creative. How creative? Well ... we have the opportunity to create the third line of the haiku that was started by the master himself. That opportunity I will give you in this Renga With Basho Hineri episode.

I will give you six (6) haiku written by Basho, one of them is that unfinished haiku. The goal is to create a renga by adding your two-lined stanza (approximately 14 syllables) as we have done earlier, but you have to complete that unfinished haiku too. Of course you have the opportunity to choose your own line-up of the haiku.

Here are the six (6) haiku (including that unfinished one) to create your renga with Basho with:

path of the sun
the hollyhock leans into
early summer rain


a dragonfly
unable to settle
on the grass

A nice series of haiku to work with I think. I am looking forward to how your Renga With Basho will evolve. !! Don't forget to make that unfinsihed haiku complete, before you use it in your renga with Basho !!

To give you an idea how to complete that unfinished haiku here is my attempt to make it complete:

(*) refers to the "The Seven Sages of the Bamboo Grove", a group of Chinese scholars and poets in the mid third century,very similar with what Henry Thoreau describes in his "Walden, Life in the Woods".

This Renga With Basho episode is NOW OPEN for your submissions and will remain open until September 18th at noon (CEST). Have fun. Enjoy this nice exercise to create a renga together with one of the most famous haiku poets ... Matsuo Basho.