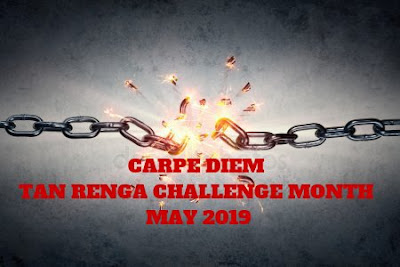 Welcome a the last week of our TRC month May 2019. I hope you all have had a wonderful week and a wonderful weekend. I had a very busy week, so I was glad that I had taken a week off. But today we are going on with our TRC month. This month I challenge you to create Tan Renga with a given haiku by classical and modern haiku poets.

Today I have chosen a nice haiku by a not so well known haiku poet, Raymond Roseliep (1917-1983). Let me give you first a short overview of his life:

Raymond Roseliep (1917 – 1983) was a poet and contemporary master of the English haiku and a Catholic priest. He has been described as "the John Donne of Western haiku."

For Raymond Roseliep the two most sacred themes were creation and love, so it was only natural that he would explore both in his haiku. In an interview first published in 1979, Roseliep was asked how a priest could be writing such evocative, sometimes erotic, love poetry. “To talk about that,” Roseliep said, “I should return for a moment to that Catholic-poetry period of mine, and I can briefly tell you how it was inevitable that I needed a fresh theme. In those early days I was writing about the Mass, the sacraments, parish experiences, religious encounters of all dimensions — in people, nature, anywhere.” He added: “I needed a new outlook. I knew that religious poetry and love poetry are the hardest of all to write, and since I hadn’t attained full success in one, I would try the other. And I have been exploring the love theme ever since. It’s wonderful. It keeps me alive and young and remembering; and always with feelings that are deepest and most sacred in all of us.”(Delta Epsilon Sigma Bulletin24:4 (December 1979);A Roseliep Retrospective: Poems & Other Words By & About Raymond Roseliep (Ithaca, N.Y.: Alembic Press, 1980), 13.)

He won the Haiku Society of America Harold G. Henderson award in 1977 and 1982. In 1981, Roseliep's haiku sequence, “The Morning Glory”, appeared on over two thousand buses in New York City:

takes in
the world
from the heart out

funnels
our day
into itself

closes
on its own
inner light

I have to admit ... I never had heard of this haiku poet until today, but his haiku are really gorgeous and mostly written in a nice "free-styling" way ... a way of haiku-ing I like as you all (maybe) know. At the end of this episode I will give you a few links to more information about him, but first I will give you the haiku to work with:

unable
to get hibiscus red
the artist eats the flower

More about Raymond Roseliep you can fnd at:

This episode is NOW OPEN for your submissions and will remain open until June 2nd at noon (CEST). I will try to publish our new episode later on. For now ... have fun!