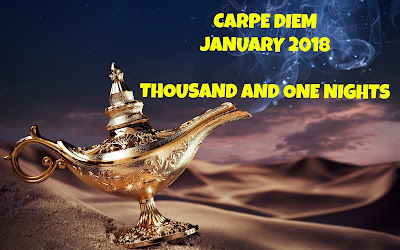 First of all I wish you all a wonderful New Year full of joy, love, good health and of course a lot of inspiration. Let us make 2018 a wonderful year together.

Okay ... back to this episode. This month we will dive into the world of fairy-tales especially the beauty of 1001 Nights (or Arabian Nights), but also into the beauty of Japanese fairy-tales, because I selected the most wonderful fairy-tales from 1001 Nights, but couldn't fill the whole month with it so I thought "maybe we have to look to the fairy-tales of the motherland of haiku ... Japan".

Our prompt-list is online so look at it, you can find it above in the menu. I will try to create the episodes this month around the diversity of the fairy-tales and I hope those fairy-tales will be a source of inspiration for all of us.

The first English edition of A 1001 Nights was published in 1706 and introduced English readers to the now-familiar tales of Sinbad the Sailor and Aladdin. The framing device of the whole collection is Scheherazade, a king’s bride who tells a series of tales to save herself from execution. Included in several of the stories are the characters themselves telling their own story, so it features a story-within-a-story.

In this first episode of 2018 I have chosen to share with you the first fairy-tale titled "The Arabian Nights" and I think it's a nice start of this month.

In the chronicles of the ancient dynasty of the Sassanidae, who reigned for about four hundred years, we read the praises of one of the kings of this race, who was said to be the best monarch of his time. His subjects loved him, and his neighbors feared him, and when he died, he left his kingdom in a more prosperous and powerful condition than any king had done before him.

The two sons who survived him loved each other tenderly, and it was a real grief to the elder, Schahriar, that the laws of the empire forbade him to share his dominions with his brother Schahzeman. Indeed, after ten years, during which this state of things had not ceased to trouble him, Schahriar cut off the country of Great Tartary from the Persian Empire and made his brother king.

Now the Sultan Schahriar had a wife whom he loved more than all the world, and his greatest happiness was to surround her with splendor, and to give her the finest dresses and the most beautiful jewels. It was therefore with the deepest shame and sorrow that he accidentally discovered, after several years, that she had deceived him completely, and her whole conduct turned out to have been so bad, that he felt himself obliged to carry out the law of the land, and order the grand-vizir to put her to death. The blow was so heavy that his mind almost gave way, and he declared that he was quite sure that at bottom all women were as wicked as the sultana, if you could only find them out, and that the fewer the world contained the better. So every evening he married a fresh wife and had her strangled the following morning before the grand-vizir, whose duty it was to provide these unhappy brides for the Sultan. The poor man fulfilled his task with reluctance, but there was no escape, and every day saw a girl married and a wife dead.

This behavior caused the greatest horror in the town, where nothing was heard but cries and lamentations. In one house was a father weeping for the loss of his daughter, in another, perhaps, a mother trembling for the fate of her child; and instead of the blessings that had formerly been heaped on the Sultan’s head, the air was now full of curses.


The grand-vizir himself was the father of two daughters, of whom the elder was called Scheherazade, and the younger Dinarzade. Dinarzade had no particular gifts to distinguish her from other girls, but her sister was clever and courageous in the highest degree. Her father had given her the best masters in philosophy, medicine, history and the fine arts, and besides all this, her beauty excelled that of any girl in the kingdom of Persia.

One day, when the grand-vizir was talking to his eldest daughter, who was his delight and pride, Scheherazade said to him, “Father, I have a favor to ask of you. Will you grant it to me?”
“I can refuse you nothing,” replied he, “that is just and reasonable.”
“Then listen,” said Scheherazade. “I am determined to stop this barbarous practice of the Sultan’s, and to deliver the girls and mothers from the awful fate that hangs over them.”
“It would be an excellent thing to do,” returned the grand-vizir, “but how do you propose to accomplish it?”
“My father,” answered Scheherazade, “it is you who have to provide the Sultan daily with a fresh wife, and I implore you, by all the affection you bear me, to allow the honor to fall upon me.”
“Have you lost your senses?” cried the grand-vizir, starting back in horror. “What has put such a thing into your head? You ought to know by this time what it means to be the sultan’s bride!”
“Yes, my father, I know it well,” replied she, “and I am not afraid to think of it. If I fail, my death will be a glorious one, and if I succeed I shall have done a great service to my country.”
“It is of no use,” said the grand-vizir, “I shall never consent. If the Sultan was to order me to plunge a dagger in your heart, I should have to obey. What a task for a father! Ah, if you do not fear death, fear at any rate the anguish you would cause me.”
“Once again, my father,” said Scheherazade, “will you grant me what I ask?”
“What, are you still so obstinate?” exclaimed the grand-vizir. “Why are you so resolved upon your own ruin?”

But the maiden absolutely refused to attend to her father’s words, and at length, in despair, the grand-vizir was obliged to give way, and went sadly to the palace to tell the Sultan that the following evening he would bring him Scheherazade.
The Sultan received this news with the greatest astonishment.

“How have you made up your mind,” he asked, “to sacrifice your own daughter to me?”
“Sire,” answered the grand-vizir, “it is her own wish. Even the sad fate that awaits her could not hold her back.”
“Let there be no mistake, vizir,” said the Sultan. “Remember, you will have to take her life yourself. If you refuse, I swear that your head shall pay forfeit.”
“Sire,” returned the vizir. “Whatever the cost, I will obey you. Though a father, I am also your subject.” So the Sultan told the grand-vizir he might bring his daughter as soon as he liked.

The vizir took back this news to Scheherazade, who received it as if it had been the most pleasant thing in the world. She thanked her father warmly for yielding to her wishes, and, seeing him still bowed down with grief, told him that she hoped he would never repent having allowed her to marry the Sultan. Then she went to prepare herself for the marriage, and begged that her sister Dinarzade should be sent for to speak to her.

When they were alone, Scheherazade addressed her thus:
“My dear sister; I want your help in a very important affair. My father is going to take me to the palace to celebrate my marriage with the Sultan. When his Highness receives me, I shall beg him, as a last favour, to let you sleep in our chamber, so that I may have your company during the last night I am alive. If, as I hope, he grants me my wish, be sure that you wake me an hour before the dawn, and speak to me in these words: ‘My sister, if you are not asleep, I beg you, before the sun rises, to tell me one of your charming stories.’ Then I shall begin, and I hope by this means to deliver the people from the terror that reigns over them.”
Dinarzade replied that she would do with pleasure what her sister wished.

When the usual hour arrived the grand-vizir conducted Scheherazade to the palace, and left her alone with the Sultan, who bade her raise her veil and was amazed at her beauty. But seeing her eyes full of tears, he asked what was the matter. “Sire,” replied Scheherazade, “I have a sister who loves me as tenderly as I love her. Grant me the favour of allowing her to sleep this night in the same room, as it is the last we shall be together.” Schahriar consented to Scheherazade’s petition and Dinarzade was sent for.
An hour before daybreak Dinarzade awoke, and exclaimed, as she had promised, “My dear sister, if you are not asleep, tell me I pray you, before the sun rises, one of your charming stories. It is the last time that I shall have the pleasure of hearing you.”
Scheherazade did not answer her sister, but turned to the Sultan. “Will your highness permit me to do as my sister asks?” said she.
“Willingly,” he answered. So Scheherazade began.

With this tale starts a collection of 33 tales ... the longest story ever told ... and so she saved her life.

This episode is NOW OPEN for your submissions and will remain open until January 8th at noon (CET). I will try to publish our new episode, The Story of the Mmerchant and the Genius, later on. For now ... have fun!