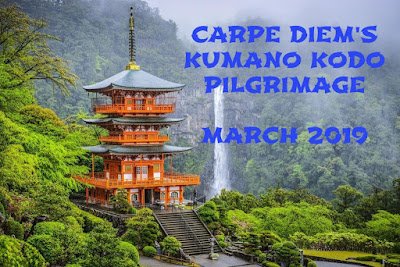 As you all know Kumano Kodo is one of the most important Shinto pilgrimages, but what do we know about Shinto. So I thought to dive into Shinto religion while we are on our Kumano Kodo pilgrimage.
Along the Kumano Kodo (ancient road) we visit several Shinto shrines and those Shinto shrines are decorated with so called "shide". A "shide" is shaped like a thunder bolt. For this episode I have chosen to give you a little back ground on this "shide".

Shide is a zigzag-shaped paper streamer, often seen attached to shimenawa or tamagushi, and used in Shinto rituals. A popular ritual is using a haraegushi, or "lightning wand", named for the zig-zag shide paper that adorns the wand. A similar wand, used by miko for purification and blessing, is the gohei with two shide. A Shinto priest waves the haraegushi over a person, item, or newly bought property, such as a building or car. The wand is waved at a slow rhythmic pace, but with a little force so that the shide strips make a rustling noise on each pass of the wand. For new properties, a similar ritual known as jijin sai is performed with a haraegushi, an enclosed part of the land (enclosed by shimenawa), and sake, or ritually purified sake known as o-miki. The haraegushi has been used for centuries in Shinto ceremonies.

What a wonderful symbol (and ritual) this is ...


This episode is NOW OPEN for your submissions and will remain open until March 21st at noon (CET). I will try to publish our new weekend meditation later on.