Maybe you have read the CD Extra already than you know that I am a bit sad that the Kumano Kodo doesn't bring you what I had hoped for so I have decided to leave the Kumano Kodo and go on another trail. That trail ... I already mentioned in our CD Extra of today. I will give you new themes for the rest of this month ... those themes have all to do with Spring, New Life, Nature coming to life again and the light returning back to us.

It's maybe an unexpected turn this month, but it really makes me sad that the responses are in a downfall ... Every day I try to create posts to inspire you ... creating those episodes takes my time. Don't understand me wrong, I like to give my time for you ... but as I see the downfall of your responses than I have difficulties to take time in creating for your inspiration.

It's the second time in our wonderful CDHK history that I decide to change the theme in a running month. Maybe you can remember that I did that earlier in the month about the Quran ... it feels like failure ... to change our theme, but ... well it had to be that way I think. 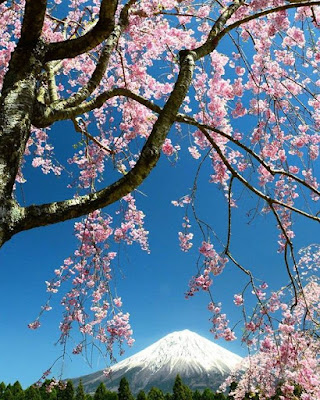 For today I have chosen to inspire you with a wonderful sonnet by William Shakespeare titled: From you have I been absent in the spring. So you can see this as an episode of that special feature "Distillation" in which I challenged you to create a haiku or tanka inspired on a longer poem. Or create a haiku or tanka from the given poem. Here is the poem by William Shakespeare:

Sonnet 98: From you have I been absent in the spring

From you have I been absent in the spring,
When proud-pied April, dressed in all his trim,
Hath put a spirit of youth in everything,
That heavy Saturn laughed and leaped with him.
Yet nor the lays of birds, nor the sweet smell
Of different flowers in odour and in hue,
Could make me any summer’s story tell,
Or from their proud lap pluck them where they grew:
Nor did I wonder at the lily’s white,
Nor praise the deep vermilion in the rose;
They were but sweet, but figures of delight
Drawn after you, – you pattern of all those.
Yet seem’d it winter still, and, you away,
As with your shadow I with these did play.

A wonderful sonnet by renown Shakespeare. Shakespeare is one of my favorite poets and I hope he can inspire you to create haiku or tanka.

This episode is NOW OPEN for your submissions and will remain open until March 28th at noon (CET). I will try to publish our new weekend meditation later on. For now ... have fun!