Welcome at a new episode of our wonderful Carpe Diem Haiku Kai were we are celebrating our 7th birthday. This month we are honoring the little creatures living on our wonderful planet. A planet in pain ... a planet that weeps because we are misusing her ...

Our wonderful planet needs us and we need her. We have to take care of her, she is our living space, the only living space there is, as far as we know. So that's one of the reasons that I choose the "litte creatures" theme for our festive 7th birthday. 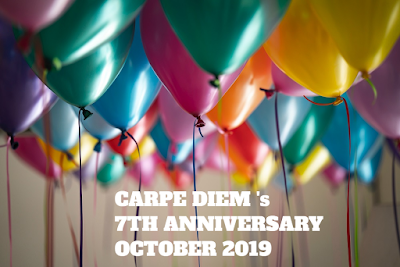 Bashō (1644–1694) wrote this haiku in the year 1680, and it is often considered to be a
marker of the beginning of Bashō’s mature style.
It should be mentioned that “Kare-eda-ni…” was not the first text to explore the topic of a crow sitting on a withered branch. First, there exists a set phrase in Chinese meaning “a chilly-looking crow on a bare tree”  which is assumed to have been familiar also to Bashō. Secondly, Bashō had written a very similar haiku several years before this one. Both texts are accompanied by paintings, all three of which present a treatment of the topic of a withered tree and a crow (or crows, since on the painting that is assumed to be the earliest, there are 27 crows depicted altogether). Thus, Bashō’s haiku has been often seen as an adaptation of an ancient Chinese phrase or a painting title. A close connection has also been found between this particular haiku and a renga verse cited in a 16th centurycollection, Hakuhatsushu:


The above haiku is one of Basho's renown masterpieces and we have seen this haiku often here at our Kai. And this haiku (again) you can use as a source of inspiration for this episode, because "crows" are our theme for today.