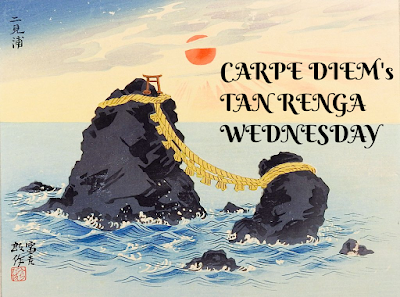 It's my pleasure to bring back a weekly feature about Tan Renga. This new feature I have titled "Tan Renga Wednesday" and as the title already says, this feature will return every Wednesday, so a new weekly feature has been born.

As you all know Tan Renga is a short renga of two stanza, similar with the Tanka, but instead of been written by one poet, the Tan Renga is written by two poets. The first stanza has three lines (approx. 5-7-5 syllables) and the second stanza has two lines (approx. 7-7 syllables). The goal is to create the second stanza by associating on the scenes and images in the first stanza.

In the logo of this new feature you see a Japanese Woodblock Print of the so called "Wedded Rocks", a Shinto religious place. The first haiku to work with in this new weekly feature is a haiku by my master, my sensei, Matsuo Basho:

a clam
torn from its shell
departing autumn

This is the last verse in Basho's 'Oku no Hosomichi' 'The Narrow Road to the Far North'. Because there are several word plays at work here, the Japanese maintain that there is no way for the poem to be rendered into another language. So here goes: hama (beach); hamaguri (a clam) however 'guri' is also (a chestnut) or (a pebble). And that is only the first line! 'Futami' (place name of the port where the famous Wedded Rocks (two large rocks considered to 'married' which are considered to be sacred) are such an attraction) is made up of the words 'futa' (lid, cover, shell) and 'mu' (body, meat, fruit, nut, berry, seed, substance, contents). The word 'wakare' can be either (to part or to split) or (to leave). Added to the last line (departing autumn) 'wakare' can mean either that it is autumn which is leaving or a person who is departing. In Ogaki, Basho was met by many of his disciples, including Sora who rejoined him, for the end of the trip back to Tokyo. This verse, and the second one in 'Oku no Hosomichi' are considered the 'book-ends' of the work with partings of Spring and Autumn.

This haiku is in my opinion a masterpiece. Re-read all those different words and their different meanings again above and let them guide you to your second stanza.

This episode is NOW OPEN for your submissions and will remain open until October 22nd at noon (CEST). I will try to publish our new episode later on. For now ... have fun!