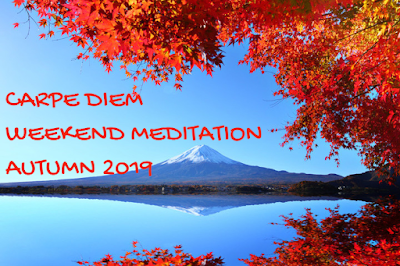 Welcome at a new weekend meditation here at our wonderful Haiku Kai were we are celebrating our 7th birthday. Last weekend I introduced a special feature for this festive month "Turn Back Time". In this special feature I will take you back in time ... or in other words "I will turn back time" into our amazing CDHK history.

This week I love to "turn back time" to another wonderful special feature we have had here at our wonderful Haiku Kai. In October 2013 I started our special feature "Revise That Haiku" with a haiku by Taigi (1709-1771). Taigi was a contemporary and friend of Buson. I will first give the haiku (including the Japanese Romaji) and then I will give the description of the moment which led to the haiku.

The brevity of haiku is not something differnt from, but a part of the poetical life; it is not only a form of expression but a mode of living more immediately, more closely to life as may be illustrated in the above haiku by Taigi.

Well ... with the desciption of the moment I think you can revise that haiku ... so ... "break a leg", have fun, be inspired and share your revised Taigi-haiku with us at Carpe Diem Haiku Kai.

Ofcourse I than gave it a try, so here is the "revised" haiku by Taigi created by me, your host:

Enjoy your weekend. This weekend meditation is open for your submissions next Sunday October 13th at 7:00 PM (CEST) and will remain open until October 20th at noon (CEST). Have fun!