I promised you yesterday to tell you something more about Basho, or the other Basho, and that's what I am going to do. Next to being a great haiku poet Basho was also very much in tune with Zen Buddhism, and (as was very common in that time in the scene of the Arts) he was interested in homosexuality. There are several haiku written by him who are in a way going about male/male love and sexuality. In those haiku are certain layers hidden and before I bring up our haiku for today I love to share a few haiku in which Basho hides his homosexual interests. By the way Basho was interested in younger man than himself, nothing wrong with if they are 18 yrs or older, but in his time that line of age was slightly lower, 14 yrs. In some of his haiku as mentioned above he refers to young guys of 14 ... an example:

young leaves
would like to wipe away
tears in your eyes 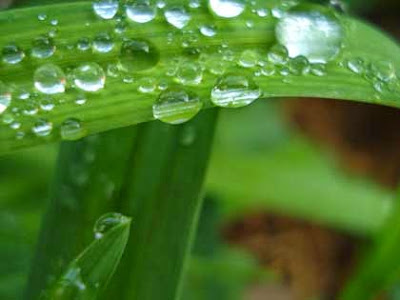 In this one 'the longing for youth' is essential. In the first two sentences it's clearly that he was longing for his youth. He thinks of the good times of his youth and got tears in his eyes.
On the other hand ... this haiku implicates his love for youngsters, especially boys. He sees the young boys, who are sad and have tears in their eyes. He would like to comfort them and wipe their tears away with his love and make them laugh again.
Another one:

Basho, while traveling through the country, met several great people and made new friends. He was also befriended with the innkeeper of Yamanaka Hot Springs. This innkeeper had a son, Toyo, to whom Basho was attracted. As Basho leaves the inn he writes this haiku especially for Toyo:

tonight my skin
will miss the hot spring
it seems colder

The "other Basho" ... I just had to tell a little bit more about him, but now back to our haiku for today. With the haiku of today came a preface which I will include (of course).

Visiting Futakamiyama Taima Temple, I saw a pine tree about a thousand years old spreading its branches over the garden. It was so large it could have covered up the cattle as Chuang Tzu said in his story. It was very fortunate and precious that the pine, under the protection of Buddha, had escaped the penalty of being cut down with an axe.

This haiku isn't a well known one I even read this one for the very first just recently in Jane Reichhold's "Basho, the complete haiku", which I use (with permission of Jane) for this month's prompts.

Here is a quote from the story were Basho is referring to:

[...] CHUANG TZU WAS WALKING in the mountains when he saw a huge tree, its branches and leaves thick and lush. A woodcutter paused by its side but made no move to cut it down. When Chuang Tzu asked the reason, he replied, "There's nothing it could be used for!" Chuang Tzu said, "Because of its worthlessness, this tree is able to live out the years Heaven gave it." [...]

The whole story you can find HERE. 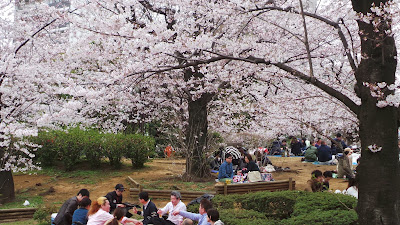 in deep silence
under the cherry tree
a young priest

Not a strong one, but I have tried to "re-produce" the atmosphere of Basho's haiku .... and I think I have succeeded ...

This episode is NOW OPEN for your submissions and will remain open until May 7th at noon (CET). I will (try to) publish our new episode, buried in moss, later on. For now .... be inspired and share your haiku with us all.