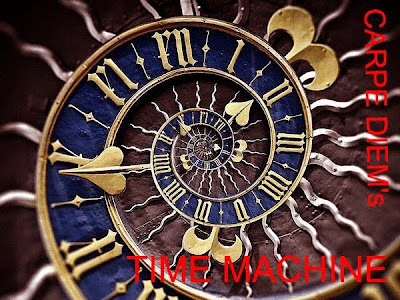 It's time again to step in our mysterious Carpe Diem Time Machine to travel back to the start of carpe Diem Haiku Kai. This episode of CD Time Machine is about "rough sea" and I think we have had this "rough sea" twice in our rich history. So for several of you this will be a well known prompt, but to others it's maybe new.


I published this prompt's post on October 19th 2012 and it brought immediately a haiku in mind by Matsuo Basho. This haiku was part of "The Narrow Road to the Deep North", one of Basho's haibun.

the rough sea
flowing toward Sado Isle
the River of Heaven

Sado was an isle for banishment.

What I like about this haiku is the contradiction between the "rough sea" and the "River of Heaven" (the Milky Way), because the sea is rough and the Milky Way sounds soft and sweet. It's a wonderful haiku I think.

Another haiku inspired on Sado, written by Yozakura:

an outcast I am
day dreaming along the seashore;
Sado Isle beckons

What a strong feeling I get from this haiku by Yozakura ... a feeling of loneliness and despair. Yozakura, shortly after becoming an orphan, is wandering along the seashore and sees in the distance Sado Isle ...

Here is my attempt to write an all new haiku inspired on "rough sea", will not be an easy one, but I have to try of course:

I hope you did like this trip back into time and that it will inspire you all to write an all new haiku or tanka and share it here with us all.

This episode is open for your submissions at noon (CET) and will remain open until Saturday August 22th at noon (CET).