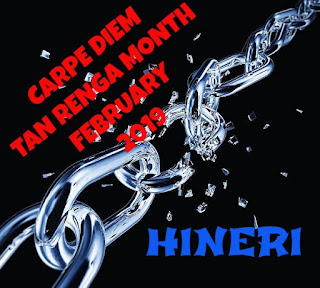 This month it's Tan Renga Challenge Month and that means every regular episode the task is to complete a Tan Renga (chained verse created by two poets) with a given haiku. Today I love to challenge you a little bit more. Today the Tan Renga Challenge is a Hineri (with a twist) challenge and that means you have to create a Tan Renga and two other stanza, so you have to create not only the second stanza of two lines, but also a third stanza (three lines) and a fourth stanza (two lines).

To start this Tan Renga Challenge Hineri I have a wonderful haiku by Katsura Nobuko (1914-2004) a female haiku poet. I had never heard from her, but she has written nice haiku. The haiku I have chosen is a love-haiku and a nice one I think to create your Tan Renga Hineri.


Let me first tell you a litte bit more about her:

Nobuko Katsura was born Nobuko Niwa in Osaka on 1 November 1914. After graduating from High School, she began writing haiku under the direction of the poet Sojo Hino, editor of the 'Kikan' (The flagship). Later she founded the Marumero (Quince) haiku group with Kenkichi Kusumoto. In March 1945 during the WWII when the American planes bombed Osaka, Nobuko's house caught fire and she was just able to gather her haiku manuscripts before fleeing from the fire. The rescued manuscripts were later published in her first volume, 'Gekkoo shoo’ (Beams of the moon 1949).

In 1954 she helped Katoo Chiyoko edit the magazine 'Josei haiku' (Women's haiku). After 'Gekkoo shoo', she published 'Nyoshin' (The female body) in 1955, 'Banshun' (Late spring) in 1967, 'Shinroku' (Young leaves) in 1974, and several other collections. In 1970 she founded the magazine 'Sooen' (The grass garden), which is still publishing today. She has also been a vice-president of the Modern Haiku Association of Japan. Her ninth collection of haiku 'Kaei' (The shadows of flowers) came out in 1998. Nobuko’s style of writing developed through the years – from the slightly erotic notions in her early poems to the calmer yet full of emotions and sensuality haiku of her later career. (Source: The Living Haiku Anthology)


Here is the haiku to start with:

A wonderful haiku in which we can easily see the theme ... love. Really a nice haiku to start our Tan Renga Challenge Hineri with.

This episode is NOW OPEN for your submissions and will remain open until February 14th at noon (CET). I will try to publish our new weekend meditation later on. For now .... have fun!