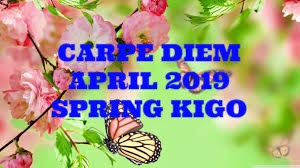 Before I start this new episode I have an announcement to make. As you all know I love creating our wonderful Haiku Kai, but as you all know too, it takes a lot of my time. I don't have a problem with that, but my family has. Every day I am busy with creating CDHK through research, conceptual posts and so on. So my wife and kids sometimes tell me to put away my laptop and give time to them. Ofcourse I am willing to do that. So earlier today I decided to take a week of this month. This means, one week there will not be a new episode every day. The only thing I do in that week is creating the "Heeding Haiku With Chèvrefeuille" episode at Mindlovemisery's Menagerie. I will take a week off every season from now on. My first week off is this month April 19th until April 27th. I will publish our weekend meditation before that week off on Friday 19th and at the end of that week I will "restart" on Friday 26th with our weekend meditation. I hope this will give me some time to relax and giving more time to my family. I hope you all don't have a problem with that.

Maybe you think "beachcombing? that sounds modern", but that isn't true, it's a classical kigo for spring taken from the Shiki Saijiki. Beachcombing is a wonderful acitivity, it's a kind of treasurehunt along the beach at low tide. Let me give you the Japanese description of beachcombing (shiohigari):

The Shiohigari is a popular Japanese tradition during spring and summer. In the literal sense of the word, it means "tide hung-out-to-dry hunt". It is an outdoor leisure activity of clam digging that is usually enjoyed by families and group of friends. It is in the months of March to June that it is normally done, but it is best to do it in May and June due to air temperature and water condition. It is also during the golden week that the beaches are the most crowded.  Annually, thousands of Japanese drive down to the beaches to hunt down Asari or Japanese littleneck clams. Then, the clams will be enjoyed later in a sumptuous meal.

Here is an example haiku with this kigo by Chiyo-Ni:

On the low-tide beach,
Everything we pick up
Moves.

Or this one created by Basho:

A green willow,
Dripping down into the mud,
At low tide.

And to conclude this episode about "beachcombing" a haiku by a not so renown haiku poet, Rofu:

Ebb-tide;
The crab is suspicious
Of the footprint.

Well ... I think you all understand the meaning of this kigo and how to use it. So have fun!

This episode is NOW OPEN for your submissions and will remain open until April 15th at noon (CEST). I will try to publish our new episode later on.