Carpe Diem Special #20, Chiyo-ni's The flowering branch of the plum

Today we start with our first Special by Chiyo-ni, our female haiku master of this month of Carpe Diem, but first I would love to introduce her to you.


Chiyo-Ni, her real name was Fukuda Chiyo-Ni (Kaga no Chiyo), was born in 1703 in Matto, Kaga Province (now Hakusan, Ishikawa Prefecture) as a daughter of a picture farmer. Chiyo-Ni began writing haiku poetry aged 7. By the age of 17, she had become very popular all over Japan for her poetry. Her poems, although mostly dealing with nature, work for a unity of nature with humanity. Her own life was that of the haiku poets who made their lives and the world they lived in one with themselves.
Chiyo-Ni's teachers were the students of Basho, and she stayed true to his style, although she did develop on her own as an independent figure. Today, the Morning Glory is a favorite flower for the people of her home town, because she left a number of poems on that flower. Her most known haiku about Morning Glory you can find HERE .
After becoming a nun ('ni' in her name means 'nun'), Chiyo took the Buddhist name, Soen. Chiyo-Ni died on October 3rd 1775 leaving us a lot of wonderful haiku.

Now we know a little bit more about Chiyo-Ni and with this short introduction of our Specials for this month has started.

Today I have a wonderful haiku written by her:

This haiku had a prescript as was common in that time, 'In regard, to requiting evil with good'. 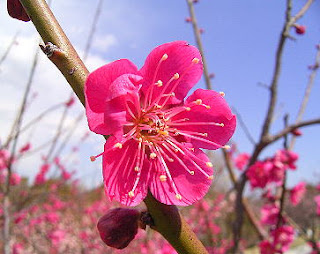 It's a typical Chiyo-Ni haiku. She has written a lot of haiku which could have the same prescript. She lived with nature as (almost) every haiku poet does. PS.: For our new contributors I will explain the goal of this Special. The haiku by Chiyo-Ni is your source of inspiration and you may write a haiku inspired on the one by Chiyo-Ni or in the same tone and Spirit. Try to 'dive in' the scene of the haiku and feel it, touch it, smell it, see it and hear it. Become one with the haiku and feel the energy to write your own haiku.

I love to share this new haiku with you (with a romaji translation):

breaking it off
the perfume of Honeysuckle
to my pencil

This one feels good and even in touch with the one by Chiyo-Ni and with her Spirit.

Have fun. Enjoy the read. Be inspired and creative. And share your haiku with Carpe Diem.