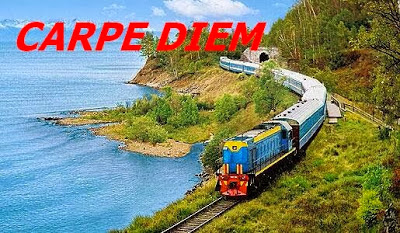 We are almost halfway our journey straight through the Soviet Union as we arrive at the Railwaystation of Krasnoyarsk. Krasnoyarsk is located on the banks of the Yenisei River and it's one of the most beautiful cities of Siberia according to Anton Chekhov, an author. Krasnoyarsk is known for it's aluminium and his wonderful nature landscapes.


Between Novosibirsk and Krasnoyarsk Paulo and Hilal become closer to each other and Paulo and she are performing again the "Ring of Fire". As Paulo does that he finally gets a look at their common history. It turns out that he was a member of the Inquisition (Witch-hunt by the Roman Catholic Church) and that he was once in love with Hilal who was in her former life the daughter of a rich man. Paulo was in that same life just a boy from a farm and was poor. They fell in love with each other, but because of the knowledge that he never would be married with her he decided to become a Dominican Monk.... that order was the order who got the task of the Roman Catholic Church to discover heresy and to save those poor people from evil by burning them.

As Paulo leaves the "Ring of Fire" he hopes that Hilal will be able to forgive him and than his thoughts go back to the Church he visited together with Hilal in Novosibirsk were he asks her to forgive him. Hilal than performs a strong prayer of forgiveness.

Now Paulo knows there will be a day in the nearby future that she will forgive him. Than ... finally he can move on with his life, but that's for a later day in this month's journey straight through the Soviet Union.

It's tough to write a haiku about this, but I have of course to try it. So here it is my haiku for this episode of our journey straight through the Soviet Union.

blackened Church
playing God on their own
hidden thoughts return

Awesome trio I think, in touch with "Aleph" ... The Inquisiton lasted until the late 19th century and is still a black time of the history of the Roman Catholic Church.
Well ... we will go on with our trip and tomorrow we will cross the Yenisei River and after a few weeks we will finally enter the end-station of the TSR at Vladivostok. This episode will stay open for your submissions until January 17th 11.59 AM (CET) and is open for your submissions tonight at 7.00 PM (CET)

Have fun, be inspired and share your haiku with our haiku-family.