Carpe Diem's Revise That Haiku #4, Shiki's ''a basket of grass'' 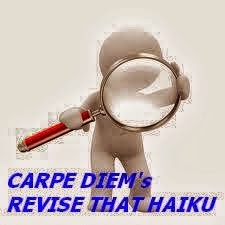 What a joy to share an all new episode of this unique feature "Revise That Haiku", I know I am a bit late, but well December was a busy month and I hadn't time enough to prepare the extra features of Carpe Diem.

An all new challenging episode of this feature is at the point to start. For this episode I have chosen a haiku by Shiki (one of the four greatest haiku-poets ever). I have titled it after the first line "a basket of grass" and it's a wonderful haiku, a real Shiki. It's an example of Shiki's haiku-art, very different from the other haiku-masters.
By the way, did you know that Shiki gave haiku it's name? Until Shiki haiku was known as haikai or hokku and with the rising of Shiki's star he became a master with insight and power in the Japanese poetry-scene. So he had the power, an accepted and respected power, in Japanese poetry. So he could give haiku it's name. Since Shiki all haikai and hokku became known as haiku.

a basket of grass,
and no one there, -
mountains of spring

How wonderful the world is, that a basket of grass, by itself, should be able to give us the meaning of the spring mountains. The mere fact that there is no one with the basket is enough to throw us back into the arms of nature. When we are entirely alone with nature, and conscious of it, we feel an emotion that can be explained only by a contradiction, yet it is a single, elemental feeling. On the one hand it is a feeling of loneliness; on the other, it is one of fullness. It is like breathing in and breathing out at one and the same time. (This is also what the meaning is of the 'Aleph' which we are searching for in our Trans Siberian Railroad month.) The spring mountains are so far off and yet so near; infinite, yet in one's breast; eternal, but of this present moment. (This also can be the explanation of the 'Aleph').


To revise this haiku will not be an easy task, but I have tried it, of course (smiles):

It's not only close to nature, it's nature itself were we are part of. Nature is in us, nature is in haiku. The beauty and sweetness of nature is just awesome ... let us hope that nature will be staying part of our life.

For our new contributors I will explain the goal of this feature. The goal of 'Revise That Haiku' is to write an all new haiku that's close to the original. So it's a challenge ... not an easy challenge, but it's a joy to look in a different way to a haiku of one of the classic haiku poets.
Have fun, be inspired and share your 'revised' haiku with our haiku-family.

Look for other episodes of 'Revise That Haiku' at:

This episode of 'Revise That Haiku' will be staying on until January 24 th 11.59 AM (CET) and is NOW OPEN for your submissions.