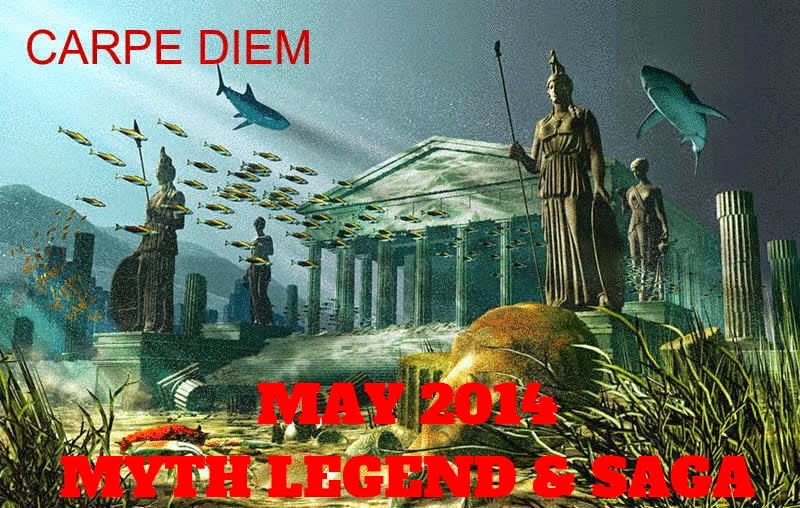 Today another nice folktale from the 'mother-land' of haiku, Japan. Another folktale with a dragon in it. In Japanese folktales dragons are shapeshifters so they can be every animal and even human.

Japanese culture has great respect for the intelligence of animals. In Japanese myth, animals are so intelligent that they often play elaborate tricks on humans. Animals are also considered to have magical or godlike powers. One such magical ability is shape shifting (obake お化け) to human form. Raccoons, foxes, snakes, badgers, wolves, cats, spiders and dogs are all thought to have this ability. The purpose of animal shape shifting is inevitably to play a prank on humans.
This folktale is titled: Otohime: Beware of Gifts From a Dragon Princess


Otohime is one of the beautiful daughters of Ryujin the dragon king (which we saw in our yesterday's post). Her main claim to fame is that she is the grandmother of Japan's first Emperor — Emperor Jimmu (Japan's first 15 Emperors are presumed to be mythical).

[...] Otohime appears in Urashima Taro, one of Japan's best known myths. Urashima Taro was a young fisherman who saved a small turtle from torture at the hands of a gang of children. It turned out that the turtle was Otohime (daughter of the dragon god).
He is rewarded with a visit to the dragon king's palace under the sea. He spends 3 days at the palace with the beautiful Princess Otohime (who has shape shifted to human form).
When it's time for the fisherman to return home, Otohime gives him a small box. She says the box will protect him but that he should never open it.
When the fisherman returns to his village he finds that 300 years has passed. His family, friends and everyone he ever knew is gone. Desperate, he opens the box and instantly becomes an old man. [...]


What a sad story ... it's about trust and love, but also about playing a prank on humans. It's about curiosity ... Urashima opens the box he got from Otohime notwithstanding what she had said and the result ... well you have read that.
children playing
in the backyard of the old mansion -
turtle flees away

turtle flees away
seeking shelter for the rain
beneath the Azalea
(c) Chèvrefeuille
Wish you all luck and a lot of joy with this prompt ... this episode is open for your submissions tonight at 7.00 PM (CET) and will remain open until May 5th 11.59 AM (CET). I will try to post our new episode, our first CD-Special by Jack Kerouac (1922-1969), later on today. For now .. have fun!
By Chèvrefeuille - May 02, 2014