Welcome at a new episode of our daily haiku meme Carpe Diem Haiku Kai were we are on a journey along the ancient Silk Road, especially the route around the Taklamakan Desert. As I started this month I wasn't aware how difficult it would be to create these every day themes, because it takes a lot of my time to do research, but ... well all for the love of haiku and our CDHK family of course. I enjoy this month, but I don't know really why I have chosen to read Siddhartha by Hermann Hess simultaneous. I really struggle with this combination, but I just have to go on with this month and the challenge I have taken myself. 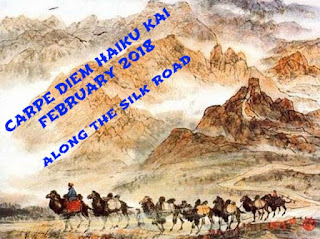 Yesterday we had a wonderful episode about "What was traded along the Silk Road" and I think I created a nice episode. That trading was also my clue to share another piece of Siddhartha, because in this wonderful novel about a young Brahman son on a quest to find Enlightenment there is also a part in which Siddhartha choses to become a man of the world, a trader. After his time under the wings of the Buddha he runs into a beautiful woman, Kamala, a rich courtesan, who also trades several goods and owns her own business. Today I love to share a part of Siddhartha in which he first sees this wonderful and beautiful Kamala.

[...] "At about noon, he came through a village. In front of the mud cottages, children were rolling about in the street, were playing with pumpkin-seeds and sea-shells, screamed and wrestled, but they all timidly fled from the unknown Samana. In the end of the village, the path led through a stream, and by the side of the stream, a young woman was kneeling and washing clothes. When Siddhartha greeted her, she lifted her head and looked up to him with a smile, so that he saw the white in her eyes glistening. He called out a blessing to her, as it is the custom among travellers, and asked how far he still had to go to reach the large city. Then she got up and came to him, beautifully her wet mouth was shimmering in her young face. She exchanged humorous banter with him, asked whether he had eaten already, and whether it was true that the Samanas slept alone in the forest at night and were not allowed to have any women with them.


While talking, she put her left foot on his right one and made a movement as a woman does who would want to initiate that kind of sexual pleasure with a man, which the textbooks call "climbing a tree". Siddhartha felt his blood heating up, and since in this moment he had to think of his dream again, he bend slightly down to the woman and kissed with his lips the brown nipple of her breast. Looking up, he saw her face smiling full of lust and her eyes, with contracted pupils, begging with desire." [...] (Source: Siddhartha by Hermann Hesse)

To make this fragment more clear I just have to share the dream Siddhartha had also:

[...] "In the night when he slept in the straw hut of a ferryman by the river, Siddhartha had a dream: Govinda was standing in front of him, dressed in the yellow robe of an ascetic. Sad was how Govinda looked like, sadly he asked: Why have you forsaken me? At this, he embraced Govinda, wrapped his arms around him, and as he was pulling him close to his chest and kissed him, it was not Govinda any more, but a woman, and a full breast popped out of the woman's dress, at which Siddhartha lay and drank, sweetly and strongly tasted the milk from this breast. It tasted of woman and man, of sun and forest, of animal and flower, of every fruit, of every joyful desire. It intoxicated him and rendered him unconscious.—When Siddhartha woke up, the pale river shimmered through the door of the hut, and in the forest, a dark call of an owl resounded deeply and pleasantly." [...] (Source: Siddhartha by Hermann Hesse)


What has this to do with our journey along the Silk Road? Well ... I think with this fragment we enter a more personal part of the Silk Road. Along the Silk Road there must have been something like places were the traders, mostly man, could find there pleasures, if you understand what I mean. And I think that the "Kama Sutra" ideas were also spread along the Silk Road, because the Silk Road wasn't only a trading route but also a route to spread ideas and believes from other countries. We already saw that Buddhism came along the Silk Road and maybe this "Tantra-philosophy" also came to the several countries along the Silk Road. Maybe I am just someone who thinks to much and loves to share his thoughts with his audience, but I love to share these things with you all.

A little controversial episode I think. At the one hand the "Kama Sutra" (the world) and at the other hand Buddhism (the Inner world), but I think it fits our theme ... the Silk Road. The Silk Road was as controversial as this episode ... so I think I can publish this.

Awesome ... a beautiful haiku (how immodest), but full of mystery.

This episode is NOW OPEN for your submissions and will remain open until February 20th at noon (CET). I will try to publish our new episode later on. By the way ... with this episode we are entering the Southern Route around the Taklamakan Desert.