Welcome at this belated weekend-meditation. This weekend I love to challenge you to revise two renown haiku by Matsuo Basho. Every one of us will have this experience I think. Sometimes you write a haiku, but a while later you are revising your first version. Nothing wrong with ... even the most renown haiku poets did this, Basho also was known for his revisions. During a period in his life say 1681-1683 he wrote his haiku in the way of the Chinese verse. He left the strict rules of haiku and tried to write his haiku in the Chinese way. After this short period we know that Basho revised his haiku that he had written in the way of the Chinese verse back to the classical way. 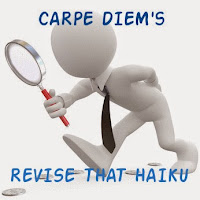 This weekend I love to challenge you to revise two of his renown haiku, "frogpond" and "crow". I know that this is quit something to revise these haiku, but remember it's a way of improving your own haiku skills.

autumn evening;
a crow perched
on a withered bough

Two really beautiful haiku by the master and now you may revise them. Have a great weekend full of inspiration.

This weekend-meditation is open for your submissions next Sunday March 4th at 7:00 PM (CET) and will remain open until March 11th at noon (CET). I will try to publish our new episode later on.

Background on "a crow perched".