Carpe Diem #1396 Unfold Your Own Myth

Welcome at the last few episodes of this wonderful month. In this month I tried to inspire you through the Qu'ran and through the beautiful poems by Rumi. This month was awesome to create, but not easy to respond on. Next month we will dive into the "matter" of writing Haibun (Prose and poetry) and I think April will be a cool month too.

Today's poem for your inspiration is taken from "The Essential Rumi" by Coleman Barks and is titled "Make Your Own Myth". It's a nice poem and it describes the wonders of creating your own myth as e.g. Moses did or Napoleon. Everyone of us can create his / her own myth, but what do you create as you "create your own myth"?

Let me tell you in short what a myth is:

Myth is a folklore genre consisting of narratives that are ostensibly historical, though often supernatural, explaining the origins of a cultural practice or natural phenomenon. The word "myth" is derived from the Greek word mythos, which simply means "story". Mythology can refer either to the study of myths, or to a body or collection of myths. Myth can mean 'sacred story', 'traditional narrative' or 'tale of the gods'. A myth can also be a story to explain why something exists.

Human cultures' mythologies usually include a cosmogonical or creation myth, concerning the origins of the world, or how the world came to exist. The active beings in myths are generally gods and goddesses, heroes and heroines, or animals and plants. Most myths are set in a timeless past before recorded time or beginning of the critical history. A myth can be a story involving symbols that are capable of multiple meanings.

A myth is a sacred narrative because it holds religious or spiritual significance for those who tell it. Myths are often therefore stories that are currently understood as being exaggerated or fictitious.

Myth ... a story to explain why something or someone exists and that's maybe the "deeper layer" in the poem by Rumi, which I will share hereafter. Rumi is known as the "Mystical Poet" and it's easy to see that "myth" is part of Mystic thought. So there is a reason why we exist ... 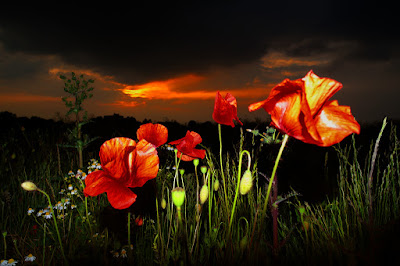 Unfold Your Own Myth:

Who gets up early to discover the moment light begins?
Who finds us here circling, bewildered, like atoms?
Who comes to a spring thirsty
and sees the moon reflected in it?
Who, like Jacob blind with grief and age,smells the shirt of his lost son
and can see again?
Who lets a bucket down and brings up
a flowing prophet? Or like Moses goes for fire
and finds what burns inside the sunrise?

Jesus slips into a house to escape enemies,
and opens a door to the other world.
Solomon cuts open a fish, and there's a gold ring.
Omar storms in to kill the prophet
and leaves with blessings.
Chase a deer and end up everywhere!
An oyster opens his mouth to swallow one drop.
Now there's a pearl.

But don't be satisfied with stories, how things
have gone with others. Unfold
your own myth, without complicated explanation,
so everyone will understand the passage,
We have opened you.

Start walking toward Shams. Your legs will get heavy
and tired. Then comes a moment
of feeling the wings you've grown,
lifting.

A wonderful, very spiritual and mystical, poem I would say. Enough to become inspired by ... at least I hope that I have inspired you with this poem, because I wasn't inspired to create my inspired poetry after reading this poem.

Hm ... nice tanka (how immodest) after all I was inspired enough ...

This episode is open for your submissions right now and will remain open until April 1st at noon (CEST). I will try to publish our new episode, another beauty by Rumi, later on. For now ... have fun!