Welcome at a new stage in our journey through Europe. Today we are visiting Germany, also one of the co-founders of the EU back in 1957, than it was by the way only western Germany, because Germany was split into western and eastern Germany, as was shown through the Berlin Wall.

In 1989, a series of radical political changes occurred in the Eastern Bloc, associated with the liberalization of the Eastern Bloc's authoritarian systems and the erosion of political power in the pro-Soviet governments in nearby Poland and Hungary. After several weeks of civil unrest, the East German government announced on 9 November 1989 that all GDR citizens could visit West Germany and West Berlin. Crowds of East Germans crossed and climbed onto the Wall, joined by West Germans on the other side in a celebratory atmosphere. Over the next few weeks, euphoric people and souvenir hunters chipped away parts of the Wall; the governments later used industrial equipment to remove most of what was left. Contrary to popular belief the Wall's actual demolition did not begin until the summer of 1990 and was not completed until 1992. The fall of the Berlin Wall paved the way for German reunification, which was formally concluded on 3 October 1990. 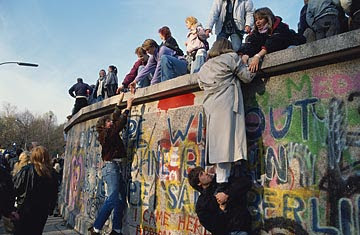 The Berlin Wall I have seen it, I have been there ... after the fall of the wall finally freedom was given.
I love the beauty of Germany, but the most beautiful of Germany (I know it's a cliché) is in my opinion the Black Forest.
God's creation
the Black Forest
a higlight

As I promised you in our first episode of our new CDHK month I hope to introduce haiku poets from every country we are visiting.

For this episode I have found two German haiku poets. I will share their haiku here (also in their own language):
autumn sun -
along the trees
skipping shadows
Herbstsonne -
an den Bäumen entlang
über Schatten springen

And here a haiku by Georges Hartmann: