As I was preparing yesterday's post I ran through older posts and I encountered a question by Birgitta of Crazy Art - Photo and Poetry. She asked that question a while ago and I had promised to write a post about it. Until today it had slipt my attention, but today I will try to fulfill my promise. Birgitta her question was about the 5-7-5 syllables rule of haiku. This will not be an easy post, because (as you all know), I am not a fan of the 5-7-5 syllables.

In ancient Japan the common rule was to write haiku in one line (mostly vertical) which was cut in three parts. Every "part" followed the idea of 5-7-5 "onji" or "sound-units". Japanese is a wonderful language which is based on sound as I have explained in our Haiku Writing Techniques chapter 2 "onomatopoeia". a Haiku Writing Technique which is especially for languages based on sounds.

As haiku became more known in the western world we have sought for the right way to translate the Japanese haiku in to our western languages, but the most western languages aren't based on sounds. So western scholars choose to follow the 5-7-5 onji rule by translating it into 5-7-5 syllables, however that made it almost impossible for several languages (including e.g. Dutch). In that time as we westerners started to translate first and later wrote our own haiku the most haiku following the 5-7-5 syllables became artificial, and were called "counted verses". 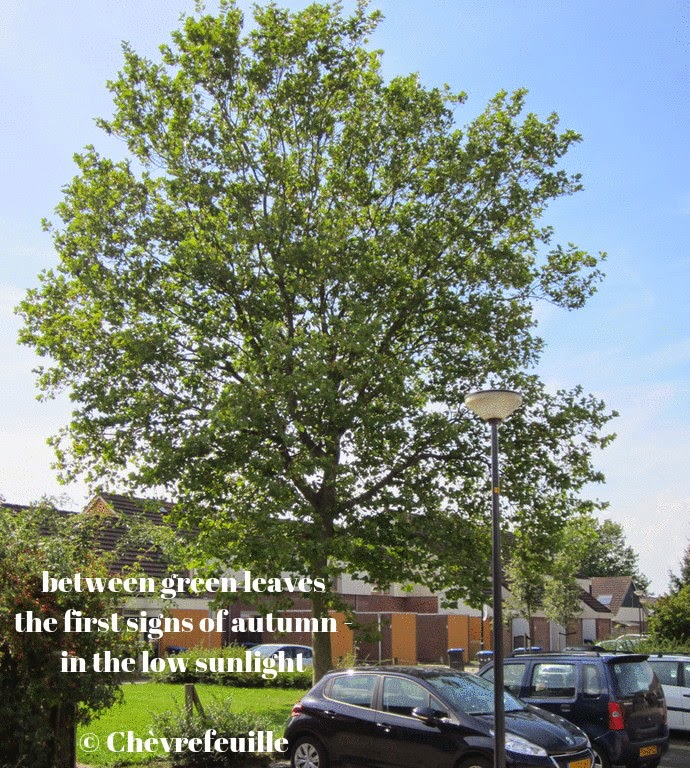 Every language has its own rules for syllables. In English the rules for syllables are different than e.g. in Dutch or Swedish ... so it's not easy to use the 5-7-5 syllables rule. Several scholars, e.g. Jane Reichhold, introduced the alternative way of composing haiku by bringing up the idea of "a haiku is a poem with three lines following the sequence short-long-short. Others started to bring another way of counting syllables e.g. 3-5-3 syllables, which is more easy to compose.

As you all know I am not a fan of the strict syllables count mostly because of the idea that it is to structured for me and gives to less freedom to compose my haiku ... and becoming artificial. There are several haiku poets of our times who started with that 5-7-5 idea, but during their growth as a haiku poet they more and more got rid of the 5-7-5 rule.
To start with haiku it's ok to use that 5-7-5 rule, but try to loose it after a while, more or less syllables will not harm your haiku ... and it gives you more freedom to compose haiku from your heart. In my opinion using the 5-7-5 rule is really artificial and more with your mind, your brain, and I think poetry has nothing to do with artificiality or your brain. Maybe this is a pure western thought, but I think we, westerners, have re-formed haiku to our western way of thinking, living and so on.

I think we have to let go the 5-7-5 rule and have to try writing haiku as westerners. It's not a "sin" if you don't use the 5-7-5 rule, it's more a blessing to become free of that rule .... it makes haiku (in my opinion) even better and stronger.
Of course that choice is yours. If you love to write your haiku in the 5-7-5 sequence .... than feel free to do so, but it is no obligation. Maybe writing haiku in the 5-7-5 way is a new challenge, to me it is for sure a challenge and not only because of my ideas about, but also because of the fact that I am not familiar enough with the syllables-rules in English. 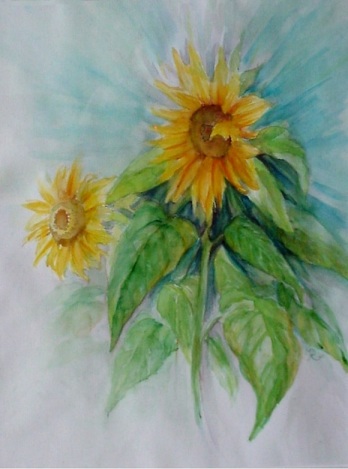 Here are my three haiku:

sunflowers
stretch out to the summer sky -
a dog barks

As I "count" the syllables of the second line following the Dutch rules, than that line has 7 syllables, but in English the syllables-count is 5 ...

Now I will try to write a haiku following the classical count of 5-7-5 syllables, an oldie:

And finally I will try to write a haiku in the "free-style":

Well ... I hope this GW-post has given you all an idea of the 5-7-5 rule and I hope to read wonderful haiku written by you all in response on this GW-post.

This episode is open for your submissions tonight at 7.00 PM (CET) and will remain open until April 10th at noon (CET). I will try to publish our new episode, the second CD Special by Kala Ramesh, later on.