As I told you in an earlier post Basho was a renga-master. The most haiku written by Basho were "hokku" or "haikai", in other words the haiku were starting verses or verses part of a renga. Today's haiku is one of his "hokku" (starting verses) for a renga.

As I was preparing this episode I ran into a nice haiku which has a kind of lesson in it and I love to share that one first, because I think it can help you to become even better haiku poets.

Jane describes the haiku as follows:

While Basho was in Kyoto he stayed with a medicine seller named Toko who was asking for admission into Basho's school. Basho gave him this advice along with the above poem: "The two halves of melon look alike, just as we are both alike in loving haikai, but you should not imitate me. You are a young merchant, so you should live in a different way than I do. I am useless, being away from the secular world". This poem is often used to tell people not to write like Basho, but the advice Basho was giving was that the young merchant need not live like Basho in order to write poetry.

I think this is true for all of us, and everyone who starts to write haiku. Try to find your own way of composing haiku, don't imitate the art of other haiku poets. I see Basho as my haiku master, but I had never the intention to be like him. Of course I am looking to touch the moment as Basho should have done, but I never will imitate him. How could I ever imitate him ... he was the best.

Back to our haiku for today. Today our haiku, moonrise, is a haiku which Basho wrote at Masahide's house for the first renga party of autumn 1690. In this haiku Basho compares the poets waiting for the party to begin to the brightening night sky. In this haiku tsuki shiro ("moon whitening") refers to the glow of the night sky just before the moon rises. 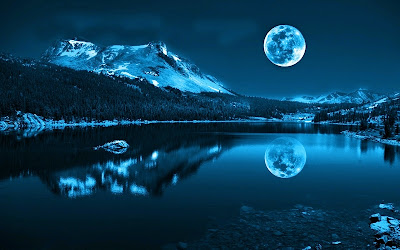 Here is my attempt to create a eight stanza renga with the above haiku as the starting verse:

on her wooden throne
grandmother makes me a new quilt

eyes full of compassion
looking at the young leaves

she, the moon, reflects in the water
splash ... her face wrinkles

Pff that wasn't an easy task, but I think I succeeded in a nice way. I am looking forward to your responses .... have fun, be inspired and share your eight stanza renga with us all here at Carpe Diem Haiku Kai.

This episode is open for your submissions tonight at 7.00 PM (CET) and will remain open until June 1st at noon (CET). I will try to publish our new episode, to hear the wild goose, later on.