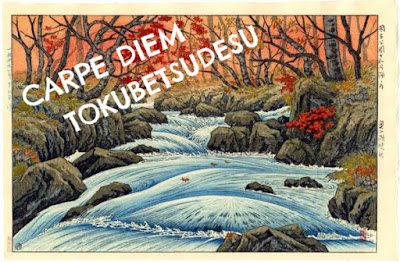 In our Carpe Diem Theme Week we are exploring the Tibetan Book of Living and Dying and I thought maybe it's a nice idea to create a Tokubetsudesu episode in which I share a kind of poetry form from Tibet.
Tibet has not a very broad range of poetry forms, but one of the most known poetry forms is in my opinion the mgur (or song with a spiritual meaning). Here is some background on this mgur and an example of a mgur.


The mgur as a primarily religious genre, dates chiefly from the time of the greatest of all Tibetan poets, Mi la ras pa* (1040-1123). Though his hundreds of mgur were not given their definitive written form until several centuries after his death, their influence on Tibetan culture seems to have been widespread from Mi la's time onward, through their preservation in various oral versions and written recensions, and through the importance Mi la quickly assumed as a Tibetan Buddhist culture-hero. Mi la's greatness lay in his ability to compose songs that combined the imagery, structural parallelism and expressive directness of ancient glu with distinctively Buddhist themes and Indian-inspired metrical schemes. In particular, Mi la ras pa—and thus the classical tradition of mgur—can be seen as inheriting two major influences:

The themes, moods and styles of Mi la's mgur range widely: though the Dharma almost always is the real subject, it is expressed in verses at various times simple or complex, devout or wrathful, puritanical or ribald, humorous or stern, intensely autobiographical or impersonally didactic. An example of one of this mgur (songs) composed by Mi la ras pa
Faith is the firm foundation of my house,
Diligence forms the high walls,
Meditation makes the huge bricks,
And Wisdom is the great corner-stone.
With these four things I build my castle,
And it will last as long as the Truth eternal!
Your worldly houses are delusions,
Mere prisons for the demons,
And so I would abandon and desert them.

The success of Mi la ras pa's songs in helping to popularize Buddhism, combined with the innate Tibetan love of poetry and song, helped assure that in the centuries after Mi la, mgur composition came to be a widely practiced art.


Well … I hope you did like this very short Tokubetsudesu episode. For this episode I love to challenge you to write a haiku, tanka, choka or another Japanese poetry form in which you try to catch your religious or spiritual ideas as did Milarepa in his poems. Of course you may also share "mgur" (song).
This Tokubetsudesu episode is open for your submissions tonight at 7.00 PM (CET) and will remain open until February 19th at noon (CET). I will try to publish our next episode, hunger, later on. For now ... have fun!