Yesterday we started with the prologue of our pilgrimage and today we are really starting to walk the road to Santiago De Compostela.
Back in the early Middle Ages, Oviedo was the starting point of the Road to Santiago, but most pilgrims started (and still start nowadays) in the Pyrenees in a little village called Saint-Jean-Pied-de-Port. This is the place were our guide, Paulo Coelho (through his novel The Pilgrimage), starts his pilgrimage to recover and regain the power and the light of his sword which he lost at the start of this novel.

[...] "You’re supposed to go to France and, at Saint-Jean-Pied-de-Port, seek out Mme Lourdes. She is going to put you in touch with someone who will guide you along the Road to Santiago."[...]


[...] "She ... kissed me desperately. She looked at me for some time without saying a word. This suddenly made me realize that now I was actually in Spain and that there was no going back. In spite of the knowledge that there were many ways in which I could fail, I had taken the first step. I hugged her passionately, trying to convey all the love I felt for her at that moment. And while she was still in my arms, I prayed to everything and everyone I believed in, imploring that I be given the strength to return to her with the sword." [...] (source: The Pilgrimage by Paulo Coelho) 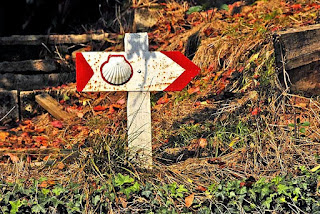 Sometimes in our lives we are on a turning point, this is that turning point for Paulo Coelho, here he starts his journey to explore his Higher Self. Sometimes we need other people to start this change, sometimes it's a personal choice. In this month we will read "The Pilgrimage" and it wasn't really Paulo's own choice, he was ordered to do so by his Master, his teacher in the ancient Tradition of RAM, but maybe ... it was his own choice through his actions during the prologue of yesterday. His subconscious "played" him. Deep in his heart he knew already that he would be to greedy. His Master also knew.
His wife's role in this story is also clear, she has to motivate him to go on exploring the path, the way, to his Higher Self ... than and only than she can (and will) return his sword to him. She is now the keeper of his sword and he has to walk the road to Santiago to deserve it (the sword) back.
This brought a tanka in mind which I shared with you last year (2016):
lotus flowers
rising from the depths of the pond
everlasting love
like a river flows onwards
uncertain of its goal

This episode is NOW OPEN for your submissions and will remain open until January 7th at noon (CET). I will try to publish our new episode, later on.