We are on our way to the stars. We already visited Andromeda and today we will explore Aquila (Eagle). In this constellation we find the bright stars Altair and Vega which have their own Japanese Festival on the 7th of the 7th month Tanabata and there are a few haiku which are written by Basho about this Tanabata Festival. That story in short:


Star Festival. On the 7th of Seventh Month, this festival celebrates the legend of the Shepherd Boy and Weaver Girl, represented as two stars, Altair and Vega. These two lovers are doomed to be separated by Heaven’s River (the Milky Way) all year except on this day, when magpies form a bridge with their wings.
do not even peer
through the leaves of the silk tree
light falls from the stars

We will see this wonderful festival again in our celebrations month October 2015.

Now ... back to our prompt of today, Aquila (Eagle), there is a nice little story to tell about this constellation and I love to share that here with you all.


Depicted as an eagle, Aquila is named for the bird that belonged to Zeus. Aquila's most famous task was carrying the mortal Ganymede to the heavens to serve as Zeus' cup bearer.
Two major novae have been observed in Aquila. The first one was in 389 AD and was recorded to be as bright as Venus. The other shone brighter than Altair, the brightest star in Aquila. A nova is what the ancients called a "new star." In reality, it is not a new star at all, but a very old one that suddenly becomes bright again, regaining some of the former glory of its youth.

Here at CDHK we have seen the Eagle several times coming by and so I have chosen a few haiku from my archives to share here with you all. 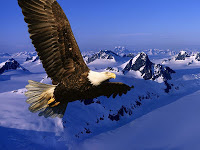 And a last one, also by myself:


© Chèvrefeuille
Well I hope you did like this "trip to the stars" of today and I hope I have inspired you all to write an all new haiku or tanka.

This episode is NOW OPEN for your submissions and will remain open until September 5th at noon (CET). I will (try to) publish our next episode, Camelopardalis (Giraffe), later on.