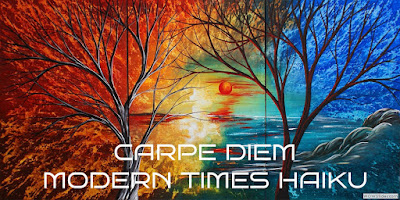 It's Tuesday again and that means ... time for an all new episode of our special feature "Modern Times Haiku". I have a wonderful haiku for you written by Richard Wright (1908-1960). Not that long ago he was the featured haiku poet here at CDHK (November 2014), but he has written a lot of beauties (all in the last 2 years of his life).


Richard Wright (1908-1960) was introduced to haiku in the summer of 1959 when he borrowed R. H. Blyth's four volumes of Haiku from a young South African and began his intensive research of the Japanese masters.
By March of 1960, Wright went into high gear composing haiku. During the final months of his life, he practically lived and breathed haiku, always carrying his haiku binder with him under his arm everywhere he went. He wrote haiku in Parisian cáfes and restaurants; in Le Moulin d' Anduve, a writing community in the French countryside; but many, like Shiki, were written while he was bedridden during his period of convalescence.
In Paris, he transferred his poems written on paper napkins to sheets of paper and then hung them up on long metal rods and strung them across his dingy studio to examine, similar to Paul Reps' idea of hanging his haiku up on lines stretched between bamboo poles.

This is one of my favorite haiku written by Richard Wright and I have turned it into a haiga ...


What do you think? Is this a beauty or is this a beauty? Will it inspire you to write an all new haiku, tanka or other Japanese poetry form? I am looking forward ...

Here is my response on this beauty by Richard Wright.
moon reflects in the pond
this autumn evening - deep silence
rustling of leaves
© Chèvrefeuille
This episode of Modern Times Haiku is open for your submissions at noon (CET) and will remain open until next Tuesday September 29th at noon (CET). Have fun!
By Chèvrefeuille - September 22, 2015