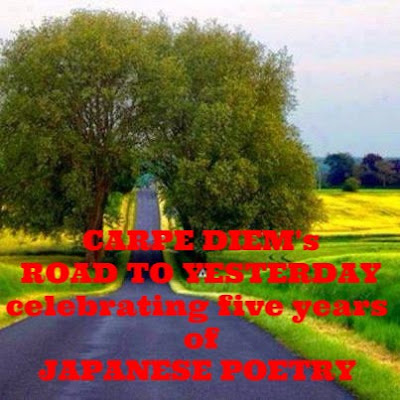 Let us take a trip back in time, back to September 2012, especially September 17th 2012. On that day I put Carpe Diem online with a kind of introductory, welcoming episode, for a new daily haiku meme inspired on a few other daily haiku memes in which I participated.


This is my new weblog. I am Chèvrefeuille a Dutch haiku poet. I love to start a new daily meme for haiku poets. This weblog is the base for that haiku meme.
I hope to see a lot of visitors to enjoy the fun of writing haiku, a classical Japanese poem, on a theme given every day.

be inspired
write your little verses
right from the heart

I hope to see you all soon.

As I look back to that time of preparations for the first ever prompt at Carpe Diem I smile. What nervous I was if it would work, if I could make it happen ... a daily haiku meme ... I was excited as I started, but also anxious ... because it had took me a lot of time and I just hoped it would work, it would become a success ... At that time I thought: "I just will give it a try, maybe it will last only for a few months, but than I have tried it". At that time I really hadn't thought that Carpe Diem would still exist several years later, yes of course I hoped it would be a success ... but there was at first the language. I had chosen to use English, but that's not my maiden language and at that time I didn't wrote a lot in English, but ... during the years I think my English has become better, at least good enough to write the blogs / episodes.

When the preparations were ready I finally could publish the first episode, Waterfall, that was on September 21st 2012, but the submissions started on October 1st 2012. 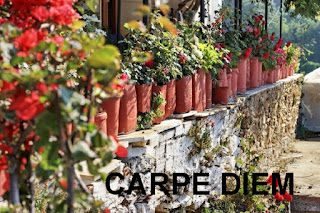 For starters ... I will give the first prompt for this new daily haiku meme today. So you can think about it and be inspired.
Carpe Diem is a new daily haiku meme in which you can share your haiku. The haiku (or senryu) can be a classical or a non-classical one. It's all up to you. The first prompt for CARPE DIEM is waterfall. I think this is a great prompt to start with. Let flow your inspiration like a waterfall and share your haiku with us.


Please be so kind to share a thought in the comment form. Do you have an idea for a new prompt? Well ... share it with us. I look forward to your contributions for this new haiku meme. And I hope it will be a success. I will try this to the end of the year ... so I hope that I can continue this haiku meme in January 2013.

And so it started ... Carpe Diem, a daily haiku-meme. Back than the most episodes were short, mostly because of the fact that my English wasn't good enough, but also because of me being nervous if this project would succeed.
Well ... next month we will celebrating our fifth anniversary ... and I really hadn't thought that Carpe Diem, nowadays called Carpe Diem Haiku Kai, would be still alive and kicking. CDHK has grown, we are a real family of haiku loving poets, and there are more parts of CDHK and of course there was the wonderful cooperation with Jane Reichhold. She inspired me to go on and was also the one who gave me the inspiration, the idea, to create exclusive CDHK e-books.

Five years after the start of Carpe Diem ... a good reason to celebrate and I have to thank you all, my dear Haijin, visitors and travelers ... you all are my inspiration, my source, my engine to go on with Carpe Diem Haiku Kai.

I am looking forward to our fifth anniversary next month and I hope you all do too, because we make Carpe Diem Haiku Kai together.