Another day in haiku paradise Carpe Diem. Today we share haiku on 'Buddha' (provided by Patricia of High Five and Raspberries). A lovely prompt I think and to me even an everlasting love, I am somewhat of a Zen-Buddhist as a haiku poet.
I love to share some background on Buddha.


Gautama Buddha or Siddhārtha Gautama Buddha (Sanskrit: सिद्धार्थ गौतम बुद्ध; Pali: Siddhattha Gotama) was a spiritual teacher from the Indian subcontinent,on whose teachings Buddhism was founded.
The word Buddha is a title for the first awakened being in an era. In most Buddhist traditions, Siddhartha Gautama is regarded as the Supreme Buddha (P. sammāsambuddha, S. samyaksaṃbuddha) of our age, "Buddha" meaning "awakened one" or "the enlightened one."  Gautama Buddha may also be referred to as Śākyamuni (Sanskrit: शाक्यमुनि "Sage of the Śākyas"). Gautama taught a Middle Way compared to the severe asceticism found in the Sramana (renunciation) movement common in his region. He later taught throughout regions of eastern India such as Magadha and Kośala.
The time of Gautama's birth and death is uncertain: most historians in the early 20th century dated his lifetime as circa 563 BCE to 483 BCE] but more recent opinion dates his death to between 486 and 483 BCE or, according to some, between 411 and 400 BCE. However, at a specialist symposium on this question held in 1988 in Göttingen, the majority of those scholars who presented definite opinions gave dates within 20 years either side of 400 BCE for the Buddha's death, with others supporting earlier or later dates. These alternative chronologies, however, have not yet been accepted by all other historians.
Gautama is the primary figure in Buddhism, and accounts of his life, discourses, and monastic rules are believed by Buddhists to have been summarized after his death and memorized by his followers. Various collections of teachings attributed to him were passed down by oral tradition, and first committed to writing about 400 years later.

The primary sources for the life of Siddhārtha Gautama are a variety of different, and sometimes conflicting, traditional biographies. These include the Buddhacarita, Lalitavistara Sūtra, Mahāvastu, and the Nidānakathā. Of these, the Buddhacarita is the earliest full biography, an epic poem written by the poet Aśvaghoṣa, and dating around the beginning of the 2nd century CE. The Lalitavistara Sūtra is the next oldest biography, a Mahāyāna/Sarvāstivāda biography dating to the 3rd century CE. The Mahāvastu from the Mahāsāṃghika Lokottaravāda tradition is another major biography, composed incrementally until perhaps the 4th century CE. The Dharmaguptaka biography of the Buddha is the most exhaustive, and is entitled the Abhiniṣkramaṇa Sūtra, and various Chinese translations of this date between the 3rd and 6th century CE. Lastly, the Nidānakathā is from the Theravāda tradition in Sri Lanka, composed in the 5th century CE by Buddhaghoṣa.

From canonical sources, the Jātaka tales, Mahapadana Sutta (DN 14), and the Achariyabhuta Sutta (MN 123) include selective accounts that may be older, but are not full biographies. The Jātaka tales retell previous lives of Gautama as a bodhisattva, and the first collection of these can be dated among the earliest Buddhist texts. The Mahāpadāna Sutta and Acchariyaabbhuta Sutta both recount miraculous events surrounding Gautama's birth, such as the bodhisattva's descent from Tuṣita Heaven into his mother's womb. 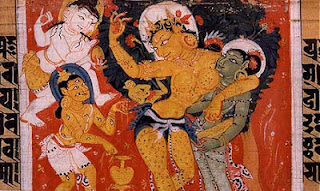 Isn't it an awesome story? As haiku poets we all have somewhat of Buddhism in us because Zen Buddhism is part of the classical haiku tradition. Nature is one of the main ideas on which haiku is inspired. Basho was a Buddhist and Issa also was a Buddhist ... and Chiyo-Ni, our haiku master for this month, was a Buddhist Nun. So haiku and Buddhism are part of each other.

Buson, not a Buddhist (as far as I know), wrote the next haiku:

autumn nightfall -
a badger has turned himself
into a Buddha

Or what do you think of this one, also by Buson:

This great Buddha:
Beyond it live Princes,
Amid the cicadas' song.

Or this wonderful haiku written by Issa:

Another one by Issa:

A last example ... a haiku by Chiyo-Ni, our haiku master for this month. Not entirely on Buddha, but with a touch of Buddha in it:

each sound of
the temple bell is different
in the wind

OK ... enough of other haiku poets ... let's go and compose my own haiku on Buddha. First a haiku written by me, earlier: 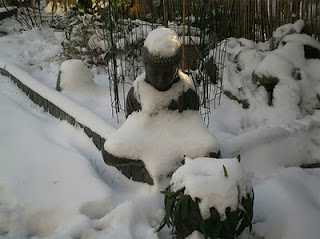 Or this one which I wrote almost a year ago:

OK ... a last one which I wrote earlier:


the cool breeze
stroking the lovely face
of Buddha's child

as a nurse
full unconditional love
just like Buddha

I love it ... just a wonderful series of haiku based on the base of haiku ... Buddhism.

Have fun, be inspired and share your haiku with us here on Carpe Diem. This prompt will stay on 'till February 4th 11.59 AM (CET) and I will post our first Carpe Diem Special of this months haiku master Chiyo-Ni later on today around 10.00 PM (CET). I haven't yet decided which haiku by Chiyo-Ni I would love to share ... so be patient ... and let the surprise catch you.