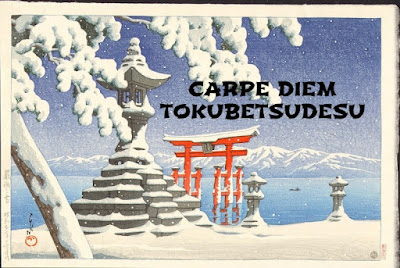 Welcome at this new episode of Carpe Diem Tokubetsudesu. In this episode I love to share poetry by our runner-up of the "tribute to Jane" kukai, Hamish Managua Gunn. I think you all have heard from him or have read his haiku and tanka.

His haiku for the "tribute to Jane" kukai brought him the runner up status and this was his haiku:

With this haiku he not only gave tribute to Jane Reichhold, but he also honored her for her choice. A very strong haiku with a very strong emotion in it.

Recently Hamish writes more and more tanka and I love to share a few of his tanka here with you to inspire you of course. Hamish is a very gifted poet and I think he is becoming a great tanka poet.

His most recent post, maybe you already have read it, he published on his Tumblr Forest Bathing:

Since we bowed in Sayonara the last time I took you to the airport, there have been so many sunrises and sunsets I have forgotten which is which. “Do not count the falling leaves,” you once told me, in your hushed voice. “What is important is that you let the tree grow big and strong.”your origami Torrii GateI place at the top of the Christmas treeand leave the forestwith the sun that always risesand the stars, that you see too 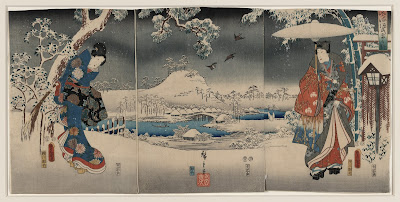 And I found another beautiful tanka written by Hamish, this tanka is one of my favorites, maybe because of the mentioning of the name of my own haiku master, Matsuo Basho. And as Hamish writes in this tanka ... "Basho taught me all I know about haiku and tanka, but mostly about nature".

I love these tanka written by Hamish and I hope they will inspire you to create tanka yourself. Have fun!

This Tokubetsudesu episode is open for your submissions tonight at 7.00 PM (CET) and will remain open until December 23rd at noon (CET).