Carpe Diem #1342 The Story of the Fisherman

Welcome at a new episode of our wonderful CDHK. Agaian I start with a haiku from my archives. It's a haiku that tells us about the anxiety of a fisherman. He loves to go out and try to catch some fish, but through the strong southern wind he dares not to sail out. But than he realizes that this is a sign that spring is coming ... and he, without a doubt, admires the beauty of spring and the upcoming beauty of the cherry trees.

What has this to do with our episode of today? In my opinion nothing, but today Scheherazade tells us the story of the Fisherman. And that means ... she saves her life for another day. And than there is the revalation ... the haiku tells us about the strong southern wind ... the fisherman decides not to go out fishing ... and maybe through that decision he saves his own life. 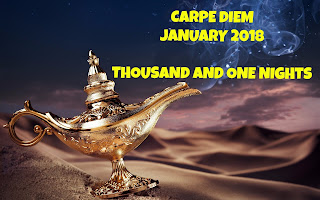 The Story of the Fisherman:

Sire, there was once upon a time a fisherman so old and so poor that he could scarcely manage to support his wife and three children. He went every day to fish very early, and each day he made a rule not to throw his nets more than four times. He started out one morning by moonlight and came to the seashore. He undressed and threw his nets, and as he was drawing them towards the bank he felt a great weight. He thought he had caught a large fish, and he felt very pleased. But a moment afterwards, seeing that instead of a fish he only had in his nets the carcass of an ass, he was much disappointed.
Vexed with having such a bad haul, when he had mended his nets, which the carcass of the ass had broken in several places, he threw them a second time. In drawing them in he again felt a great weight, so that he thought they were full of fish. But he only found a large basket full of rubbish. He was much annoyed.
“O Fortune,” he cried, “do not trifle thus with me, a poor fisherman, who can hardly support his family!”
So saying, he threw away the rubbish, and after having washed his nets clean of the dirt, he threw them for the third time. But he only drew in stones, shells, and mud. He was almost in despair.
Then he threw his nets for the fourth time. When he thought he had a fish he drew them in with a great deal of trouble. There was no fish, however, he found a yellow pot, which by its weight seemed full of something, and he noticed that it was fastened and sealed with lead, with the impression of a seal. He was delighted. “I will sell it to the founder,” he said; “with the money I shall get for it, I shall buy a measure of wheat.”


He examined the jar on all sides; he shook it to see if it would rattle. But he heard nothing, and so, judging from the impression of the seal and the lid, he thought there must be something precious inside. To find out, he took his knife, and with a little trouble he opened it. He turned it upside down, but nothing came out, which surprised him very much. He set it in front of him, and whilst he was looking at it attentively, such a thick smoke came out that he had to step back a pace or two. This smoke rose up to the clouds, and stretching over the sea and the shore, formed a thick mist, which caused the fisherman much astonishment. When all the smoke was out of the jar it gathered itself together, and became a thick mass in which appeared a genius, twice as large as the largest giant. When he saw such a terrible-looking monster, the fisherman would like to have run away, but he trembled so with fright that he could not move a step.
“Great king of the genie,” cried the monster, “I will never again disobey you!”
At these words the fisherman took courage.
“What is this you are saying, great genius? Tell me your history and how you came to be shut up in that vase.”
At this, the genius looked at the fisherman haughtily. “Speak to me more civilly,” he said, “before I kill you.”
“Alas! why should you kill me?” cried the fisherman. “I have just freed you; have you already forgotten that?”
“No,” answered the genius; “but that will not prevent me from killing you; and I am only going to grant you one favor, and that is to choose the manner of your death.”
“But what have I done to you?” asked the fisherman.
“I cannot treat you in any other way,” said the genius, “and if you would know why, listen to my story.

Wow! What a story this is. After three bad catches the fourth throw brings the fisherman a jar. The fisherman is curious to know what is in this beautiful jar so he opens it ... and than there is that awful genius who wants to kill him. What a sad story this is, but the story goes on ... HERE.

This episode is open for your submissions tonight at 7:00 PM (CET) and will remain open until January 14th at noon (CET). I will try to post our new episode, The Story of the Greek King and the physician Douban, later on. For now ... have fun!