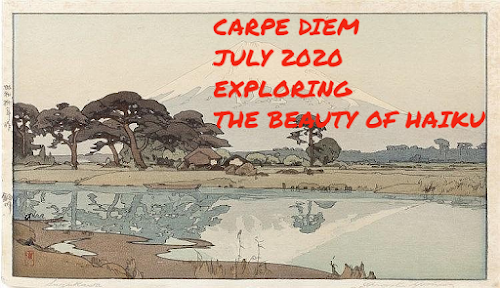 Dear Haijin, visitors and travelers,
Welcome at a new episode of our wonderful Kai. This month we are exploring the beauty of haiku through several writing techniques. Yesterday I introduced to you "apokoinou", and I have seen already a few nice submissions.
Today I love to challenge you with writing a haiku in which you use "juxtaposition". Let us first look at the meaning of "juxtaposition". Maybe you remember our series about "Haiku Writing Techniques", I reproduce a part of the episode on "juxtaposition".
JUXTAPOSITION
Juxtaposition or in a more "visible way"; if a waiter served you a whole fish and a scoop of chocolate ice cream on the same plate, your surprise might be caused by the juxtaposition, or the side-by-side contrast, of the two foods.
Any time unlike things bump up against each other, you can describe it as a juxtaposition. Imagine a funeral mourner telling jokes graveside, and you get the idea — the juxtaposition in this case is between grief and humor. Juxtaposition of two contrasting items is often done deliberately in writing, music, or art — in order to highlight their differences.

I often hear that juxtaposition is a key to successful haiku. The contrast of two images in haiku is most often instrumental in creating resonance.
Robert Spiess, editor of 'Modern Haiku', has said the following about juxtaposition in haiku:
[...] “Juxtaposition of entities in haiku cannot be simply the throwing together of just anything; the poet must have the intuition that certain things, albeit of "opposite" characteristics, nonetheless have a resonance with each other that will evoke a revelation when they are juxtaposed in accordance with the time-tested canons and aesthetics of haiku.” [...]
An example from my archives:
perpetual snow
reflects the sunlight -
I dream of a nude beach
© Chèvrefeuille
Here another example, that renown haiku by Matsuo Basho (1644-1694), "frogpond":
ancient lake . . .
a frog jumps into it
sound of water
© Basho (Tr. Chèvrefeuille)
Well ... what a wonderful writing technique this is. Now it is up to you to create a haiku in which you use the "juxtaposition" technique. Enjoy!
Here is mine:
such sadness
to see tears on young leaves
the bright sunlight
© Chèvrefeuille
This episode is NOW OPEN for your submissions and will remain open until July 7th at 10:00 PM (CEST). Have fun!  >>> you can add your submission by clicking on our logo here below <<<

Email ThisBlogThis!Share to TwitterShare to FacebookShare to Pinterest
Labels: juxtaposition