Carpe Diem Haiku Kai Celebrates Its 9th Anniversary: #1852 Out In The Fields 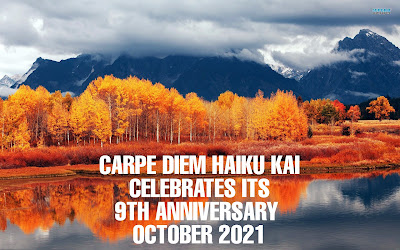 Welcome at a new episode of our Haiku Kai's celebration month, October 2021. We are celebrating our 9th anniversary with a "trip along memory lane" and today I have (another) nice episode in which we look back into our rich history.

As you all know there are several features here on CDHK and today I have a nice one. I don't know if you remember this special feature, but back in time it was one of my better creations "Carpe Diem's Time Travel, Ancient Japanese Poetry To Inspire You". 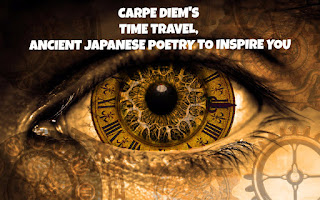 Let me give you a piece of one of the episodes of "Time Travel":

[...] In the Hyakunin-isshu are themes such as nature, the round of the seasons, the impermanence of life, and the vicissitudes of love. There are obvious Buddhist and Shinto influences throughout.

A very nice Tanka I would say. It's written in a very sophisticated style that fits the Emperor. I especially like the rhyme in the last two lines. As you all know (maybe), it is "not done" to use rhyme in Tanka, but in this one it seems that it had to be that way. It gives the Tanka "style". [...]

The above tanka brought a (not so well known) haiku by Basho in mind.

forbidden to say
how sleeves are wetted
in the bathroom

Mount Yudano was a sacred and secrative place for the Shinto sect. More about this haiku by Basho you can find at Basho Revisited, one of my other personal weblogs.

So for this episode I love to challenge you to create a haiku or tanka in which you hide sexuality and the beauty of the human body. I will give you an example, which you maybe remember:

what has happened?
petals of red roses around
the morning glory

"Morning glory" points to a certain male part. So in this haiku you find hidden sexuality and the beauty of the human body.

This episode is NOW OPEN for your submissions and will remain open until October 24th at 10:00 PM (CEST). You can add your submission to the linking widget hidden in our logo below.