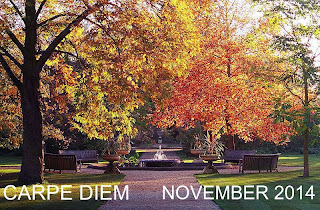 A new episode ... I found a wonderful poem about a Juggler, our prompt for today, so this new episode will become a little bit like our Carpe Diem Distillation feature in which the goal is to distil a haiku (or a few haiku) from a longer poem.
Not so long ago I told you all that I would make choices for which special features I will use at our Carpe Diem Haiku Kai and I think I have found the happy medium in this dilemma. I will try to explain it to you all. I have decided to use the Special features, not any more apart from the regular prompts, but in the regular prompts, excluding a few as for example "Time Glass" and "Sparkling Stars".So in this new episode I will use our (former) Special feature "Distillation". The poem I found for this prompt, Juggler, is written by Richard Wilbur (1921 ). I will give you all first a brief biography about him, before I share the poem.

Richard Purdy Wilbur is an American poet and literary translator. He was appointed the second Poet Laureate Consultant in Poetry to the Library of Congress in 1987, and twice received the Pulitzer Prize for Poetry, in 1957 and again in 1989.
Wilbur was born in New York City and grew up in North Caldwell, New Jersey. He graduated from Montclair High School in 1938, having worked on the school newspaper as a student there. He graduated from Amherst College in 1942 and then served in the United States Army from 1943 to 1945 during World War II. After the Army and graduate school at Harvard University, Wilbur taught at Wesleyan University for two decades and at Smith College for another decade. At Wesleyan, he was instrumental in founding the award-winning poetry series of the University Press. He received two Pulitzer Prizes for Poetry and, as of 2011, teaches at Amherst College. He is also on the editorial board of the literary magazine The Common, based at Amherst College. He married Charlotte Hayes Ward in 1942 after his graduation from Amherst; she was a student at nearby Smith College.
When only 8 years old, Wilbur published his first poem in John Martin's Magazine. His first book, The Beautiful Changes and Other Poems, appeared in 1947. Since then he has published several volumes of poetry, including New and Collected Poems (Faber, 1989).
Continuing the tradition of Robert Frost and W. H. Auden, Wilbur's poetry finds illumination in everyday experiences.

[...] "Continuing the tradition of Robert Frost and W. H. Auden, Wilbur's poetry finds illumination in everyday experiences " [...} and that makes him also a poet who maybe is in touch with Haiku, as Frost was. Haiku is also poetry about everyday experiences ... so who knows ... maybe Richard Wilbur will try his hand on haiku.


Here is the poem which I love to share here for our prompt, Juggler ...:


A ball will bounce; but less and less. It's not
A light-hearted thing, resents its own resilience.
Falling is what it loves, and the earth falls
So in our hearts from brilliance,
Settles and is forgot.
It takes a sky-blue juggler with five red balls

To shake our gravity up. Whee, in the air
The balls roll around, wheel on his wheeling hands,
Learning the ways of lightness, alter to spheres
Grazing his finger ends,
Cling to their courses there,
Swinging a small heaven about his ears.

But a heaven is easier made of nothing at all
Than the earth regained, and still and sole within
The spin of worlds, with a gesture sure and noble
He reels that heaven in,
Landing it ball by ball,
And trades it all for a broom, a plate, a table.

Oh, on his toe the table is turning, the broom's
Balancing up on his nose, and the plate whirls
On the tip of the broom! Damn, what a show, we cry:
The boys stamp, and the girls
Shriek, and the drum booms
And all come down, and he bows and says good-bye.

If the juggler is tired now, if the broom stands
In the dust again, if the table starts to drop
Through the daily dark again, and though the plate
Lies flat on the table top,
For him we batter our hands
Who has won for once over the world's weight.

To close this episode I will you a little bit about "juggling":

Juggling is a physical skill, performed by a juggler, involving the manipulation of objects for recreation, entertainment, art, or sport. The most recognizable form of juggling is toss juggling. Juggling can be the manipulation of one object or many objects at the same time, using one or many hands. Jugglers often refer to the objects they juggle as props. The most common props are balls, clubs, or rings. Some jugglers use more dramatic objects such as knives, fire torches or chainsaws. The term juggling can also commonly refer to other prop-based manipulation skills, such as diabolo, devil sticks, poi, cigar boxes, contact juggling, hooping, and hat manipulation.

It will not be an easy task to write/compose a haiku from  juggler, but I have to try ... here is my attempt to distil a haiku from Juggler:
sky-blue juggler
laughs at his audience -
a sphere of balls

Well ... not a very strong trio of haiku, it wasn't easy to distil haiku from the Juggler, but ... well I just had to try it ... and now it's up to you my dear Haijin, visitors and travelers to distil a haiku (or a few) from the poem by Richard Wilbur. So have fun! (I am behind with commenting I will try to catch up a.s.a.p., but can't garantee you all that I will write comments., but I will for sure visit you all and "like" or "google

!! I have published a new column Suikazura No Retsu. You can find it in the left part of the weblog. This episode of my column is about some changes at Carpe Diem Haiku Kai !!

This episode will be open for your submissions tonight at 7.00 PM (CET) and will remain open until November 16th at noon (CET). I will try to publish our next episode, Hantu Pisang, later on.
By Chèvrefeuille - November 13, 2014