Welcome at a new month of Carpe Diem Haiku Kai. December 2014 will be another awesome month as we are starting today with counting down to New Year's Eve. As you could have read in our new prompt list (which you can find above in the menu) this month I have chosen prompts from Jane Reichhold's "A Dictionary of Haiku", a modern kigo Saijiki. All our prompts this month will be modern kigo (season words) for winter.
First I want to thank you all for your kind words sprinkled on me in response on the post of the last day of November. I am glad that you all like Carpe Diem Haiku Kai and that makes me happy. I also want to apologize for not being that strong in commenting on all your wonderful posts, it's taking to much time. Of course I will visit all of your submissions, but forgive me ... if I don't have left a comment. I hope to catch up commenting from today ...
Second ... I have a little gift for you all ... I have created/compiled a little anthology in response of the "Just Read" episode about "the moon tradition in haiku". You can find it at the left of your screen. It's free to download and I hope you will like it all. If I haven't used your haiku than there was no permission given, but if you want your haiku included than let me know and I will make a new version of this little e-book which I have called "for the sake of the moon". (PS. The image is not the cover, because the original cover is on the PC at my work). 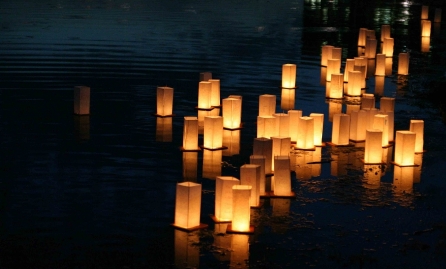 Ok ... here we go ... our first prompt of December 2014. The first prompt, accepting the finite, is a very strong prompt, but also one full of sadness and tears. It's not easy to accept the finite. As I look at my own situation than I still can't accept the idea that my older brother already has passed away. He was to young to die, he was just 35 in the strength of his life, a great job (in which he had two months before he died given promotion for) and he lived very healthy ... but the cancer took him.
I have given his dead a place in my mind and heart, but still haven't accepted it ... I maybe will never accept it.

In "A Dictionary of Haiku", Jane gives a nice series of haiku as example for this prompt. It takes to much to reproduce them all here, but I have two haiku for you as an example. I think these haiku are very strong, but I like the first the most.

where others lived
abandoned cabin

dusting the dresser
a gown which shared
our passion

I have said nothing to much I think, both are beauties and it will be not an easy task to write an all new haiku on "accepting the finite".
I have tried to write a cascading haiku as a kind of tribute to my brother who died at lung cancer almost 20 years ago. It's ... maybe my kind of trying to accept the finite ... finally ...

the glory of life
cherry blossoms blooming
above his grave

above his grave
the skylark is glorifying
his Creator

his Creator
brought new life to the world
somewhere

somewhere
some day ... maybe I can accept
the finite

This cascading haiku, ... the wave of life ..., the wave of a resurrection once ... my dear brother we will meet again.

This episode is open for your submissions tonight at 7.00 PM (CET) and will remain open until December 3rd at noon (CET). I will (try to) post our new episode, delight in company, later on. For now ... be inspired and share your haiku with us all.