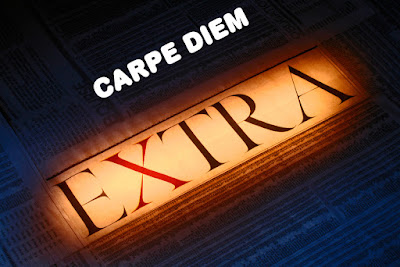 As you all know next October we will celebrate our third (3rd) anniversary. I am already busy with preparing that festive month for our Haiku Kai. In one of my earlier posts I told you that I have found a wonderful featured haiku poet already. Again a well known haiku poet, Michael Dylan Welch, will be our featured haiku poet.
Recently Jane Reichhold introduced me to Tom D'Evelyn, another well known haiku poet from the USA. At first I asked him to be our second featured haiku poet, but he did me a proposal which I accepted. Tom will write an essay especially for Carpe Diem Haiku Kai. I am honored that Tom will do this for CDHK.
Is that all there is? No, ... I hope to come in contact with Cor van den Heuvel, a well known haiku poet too, and I will ask him the same question as I did ask Tom. I hope he (Cor) will be our 2nd featured haiku poet or that he will write an essay for us. I keep you all posted.
Than of course there will be our prompts, all Japanese festivals. I will (try to) tell more about the background and mythology of those festivals and when they will take place (or took place).
Last but not least. I hope to come in contact with one or two Japanese haiku poets/esses. Jane Reichhold will try to find one or two through her connections with the Japanese haiku and tanka world. I hope to inform you all later this month.

!! Last call for submissions for our 3rd kukai "Juxtaposition"!!

Our third CDHK kukai "Juxtaposition" is running towards its end. This is the last call for submissions. You can submit a maximum of three haiku (only haiku) until August 16th 10.00 PM (CET) to carpediemhaikukai@gmail.com . Please write "kukai juxtaposition"in the subject line.

Our first CDHK Renga Party is running and I have read wonderful links. Please try to write your link in time as it is your turn. You have 24 hours to respond. Don't forget to invite the one after your turn to write his/her link.

Recently I became a member (and ambassador for The Netherlands) of the United Haiku and Tanka Society (UHTS) an organization which is promoting the beautiful haiku and tanka world wide>
Visit their website by clicking on the UHTS-logo in the left upper corner of our Kai.