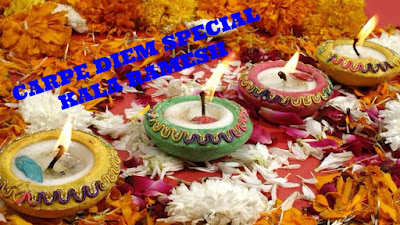 Today it's not only our last episode of this month, but also the last Carpe Diem Special by Kala Ramesh, an Indian haiku poetess, who is renown all over the globe and who also was befriended with Jane Reichhold. Kala has written gorgeous haiku and tanka so for this last CD Special about her work I have tried to find a few beauties, haiku and tanka.

spring breeze —I catch the tuneshe leaves behind *

illusions rideon a fast fading rainbowsomewhere thereI let go of my childhood... I must have

It was really a joy to have Kala Ramesh as our guest here at Carpe Diem Haiku Kai. She has written wonderful haiku and tanka and I am glad that she could inspire us through her haiku and tanka.

orange chrysanthemums decorating the backyard of the old mansion

This episode is NOW OPEN for your submissions and will remain open until November 4th at noon (CET). I will (try to) publish our new and first episode of our "Tanka Splendor" month later on. In that first episode we will discover the first Tanka Writing Technique by Teika Mystery and Depth.