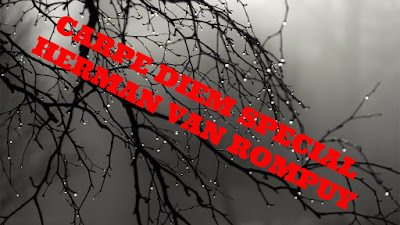 In our region he is a well known celebrity, but here at CDHK I think I have mentioned him once, not for his political career, but as a haiku poet. I was pretty much surprised to read that Herman van Rompuy is a haiku poet too. He even has published a few haiku books in which he published his wonderful haiku. Herman van Rompuy is not well known in our haiku world, but he is a honorable member of a few Japanese haiku organizations.
I have tried to contact with him several times, as I was starting with the preparations of our 4th anniversary month , but I haven't yet an answer on my question to use his haiku with his permission. So if there is a problem than I love to hear from it. Of course I will give credit to his works I will use here at CDHK. I choose Herman van Rompuy as our guest haiku poet because of our earlier Ginko through the EU .
As I ran into haiku written by him I immediately was caught by the beauty of his work and his strong observations so I hope to inspire you my dear Haijin, visitors and travelers through the haiku of our third honorable guest this month.

The above special logo is inspired on the haiku I love to share here with you for your inspiration which I titled "the night has fallen".

This haiku, in my opinion, resonates in tune with the time of year, but in this haiku I also sense a reflection of that wonderful haiku by Matsuo Basho (1644-1694):

And in a way I also sense something of a haiku I wrote myself back in 2015:

To stay more close to the haiku of Herman van Rompuy I created the following haiku:

In this one I think I stayed as close as possible to the loneliness Herman van Rompuy paints in his haiku.

I hope you did like this episode in which I introduced Herman van Rompuy to you. And of course I hope you will find inspiration through this post to create your own haiku or tanka.

This episode is NOW OPEN for your submissions and will remain open until October 10th at noon (CET). I will (try to) publish our new episode, paint, later on. For now ... have fun!