Welcome at a new episode of our "weekend-meditation", this week I have a (I hope) nice episode of Namasté to inspire you. I had some trouble to find a theme this week for Namasté, but than I ran into a nice poem by the English poet Thomas Hood (1799-1845) and I thought "maybe I can stay a little in tune with our regular prompts this month ... poems by Persian poets".

At first I thought this will become a tough episode to write because in the first lines of the poem Thomas Hood speaks about "the cold grave", but as I read on I saw the broader perspective of the poem. So here it goes ...

In one of my earlier posts this month I talked about existentialsm based on Nietzsche. I tried to explain existentialism with the following phrase:

[...] "Existentialism is the belief that philosophical thinking begins with the human subject—not merely the thinking subject, but the acting, feeling, living human individual. While the predominant value of existentialist thought is commonly acknowledged to be freedom, its primary virtue is authenticity. In the view of the existentialist, the individual's starting point is characterized by what has been called "the existential attitude", or a sense of disorientation, confusion, or dread in the face of an apparently meaningless or absurd world." [...]

Thomas Hood's poem can be read as an existentialism poem, because he describes the "spiritual ways" of human kind. He describes man in his / her world in which they exist ... but during his poem his "theme" changes to the spirit, our the self consciousness.
We are all conscious, we have all self-consciousness ... and through that you can find your own "hiding place", "your own safe haven", "your own place to find the silence and come in tune again with your self-consciousness and mayb "tap-in" in that bigger "thing" ... the collective consciousness of all mankind, of all his / her surroundings. Self consciousness is a great good, but to be part of the collective consciousness is better. We are all one, we are all one with evrything and everyone ... together we can bring the silence back in our world ...

Here is the poem by Thomas Hood:

There is a silence where hath been no sound,
There is a silence where no sound may be,
In the cold grave—under the deep deep sea,
Or in the wide desert where no life is found,
Which hath been mute, and still must sleep profound;
No voice is hush’d—no life treads silently,
But clouds and cloudy shadows wander free,
That never spoke, over the idle ground:
But in green ruins, in the desolate walls
Of antique palaces, where Man hath been,
Though the dun fox, or wild hyena, calls,
And owls, that flit continually between,
Shriek to the echo, and the low winds moan,
There the true Silence is, self-conscious and alone.

A wonderful poem I would say. Full of spirituality and full of inspiration ... here is my attempt to create a poem inspired on this post.

Not as strong as I had hoped, but I think in this tanka there are several layers, maybe not all spiritual, but there certainly are more than one ways to "explain" this tanka. 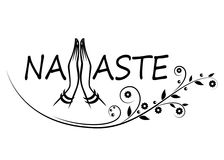 This episode of Namasté is, as you all know, open for your submissions Sunday March 19th at 7.00 PM (CET), so you have time to meditate and contemplate before you respond on this Namasté episode. I will post our new episode, potted plant, the first episode of our Theme Week about Hafiz (or Hafez) later on Sunday March 19th around  7.00 PM (CET). Have fun! Have a great weekend!