Welcome at a new episode of our "weekend-meditation". This week I have a nice new episode of Namasté, The Spiritual Way. I think it's a nice weekend to have a Namasté episode, because of the fact that it is Easter this Sunday. So that's why I have chosen for the "sub-title" New Life (Easter).

As you all know Easter is the holiday on which we celebrate the resurrection of the Lord, it's the end of the so called "Lenten", the period from Ash-Wednesday until Easter. Here in The Netherlands we have already started with the so called Easter period, because yesterday (Thursday April 13th) it was "White Thursday", today it is "Good Friday" and tomorrow it is "Silent Saturday" and than Sunday the day to celebrate that the Lord has risen from the death.

24 On the first day of the week, very early in the morning, the women took the spices they had prepared and went to the tomb. 2 They found the stone rolled away from the tomb, 3 but when they entered, they did not find the body of the Lord Jesus. 4 While they were wondering about this, suddenly two men in clothes that gleamed like lightning stood beside them. 5 In their fright the women bowed down with their faces to the ground, but the men said to them, “Why do you look for the living among the dead? 6 He is not here; he has risen! Remember how he told you, while he was still with you in Galilee: 7 ‘The Son of Man must be delivered over to the hands of sinners, be crucified and on the third day be raised again.’ (Luke 24: 1 – 7 NIV)


What does this mean? It brought my thoughts back to our Theme Week about The Tibetan Book of The Living and Dying; and it also brought my thoughts back to our Tarot-month back in 2013. In that Tarot-month we discovered that the Tarot isn't occult, but divine ... and this is what we discovered about the resurrection of humanity:
In the so called "Great Arcana", we find the card titled "Death", it's the 13th card of the "Great Arcana". That card tells us a lot, to much to replay here again, but part of that episode I love to "re-print" here again:
There is no death.  There is only resurrection.  Live your  life of fulfillment, taking advantage of every opportunity of every moment of every day.  When the miracle of resurrection has passed on, then you are at peace to recognize that things have simply returned to their natural state.
That is why this card is in the Tarot deck.  It is meant to be embraced.  It is meant to be a gateway to a new birth.  If we can embrace death, then our lives are transformed.  That is the physical realm.  This is also a card of immense spiritual power.  The crucifixion of ego, that we saw in the Hanged Man, can and will become reality.  As that ego dies, we then live in a glorious resurrection.  As we continue to look at the card, we see several important elements.
Death is a secret, death is a darkness which we do not wish to look at nor embrace.  So if we are not going to supplicate death and we're not going to ignore death, what response do we have?  The response of the little child.  Unless we have faith like a little child, we will never enter the Kingdom of Heaven and recognize all truth.  The little child does not seek to turn death into a friend.  The little child does not seek to ask death to go away.  The little child does not turn her eyes and pretend that death is not there.  The little child opens her eyes, sees death in the face, recognizes death as what it is, and has a simple straight forward natural acceptance of this reality.
The disciples were engaged upon the start of the spiritual pathway when they began to understand the resurrection of Jesus.  You must start there to understand the death and resurrection of Jesus.  But as we have said before, Jesus’ death and resurrection are only the beginning, because they are an instruction booklet for you and your personal death and resurrection.  That is the power that enables you to embrace death, look it squarely in the face with the faith of a little child, and rise beyond the human limitations to a glorious and infinite resurrection. (Source: Carpe Diem #199, May 18th 2013) 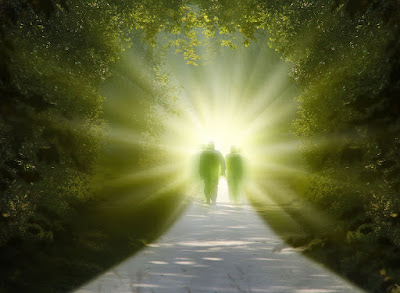 What does "The Tibetan Book of Living and Dying say about this? Well ... let us "jump" back in time and re-read part of the Theme Week about the Tibetan Book of Living and Dying, in this part it's about what Tibetans call "Bardo":
The original meaning of bardo is, the space between the moment of dying and reincarnation / rebirth. As we 'dive' deeper into this matter than we discover more than one bardo. Let's go ...
First there is the bardo of living and dying. This is a painful bardo, but also the moment that the nature of spirit / soul becomes real and in a way breaks through the armor of the body. This we can see in, for example, the story of Easter as Jesus prays in the Garden of Gethsemane and asks His Father, God, to take away the cup of poison. Than He is arrested and endures the pain of 39 lashes and the crucifixion. As He dies He commands His Spirit to His Father. This is what we can call the bardo of living and dying.
What follows is the bardo which is called the shining bardo or dharmata, the state of consciousness / mind after death. To explain this shining bardo, wasn't easy, because I could not find something to explain it with. Then I got a revelation. This shining bardo you can see as a bright light, the radiation of the pure nature of spirit / mind. It's a state of pure happiness. In a way this you can see as what is happening as you (someone) has a Near Death Experience (NDE). I ran into a few stories about NDE when I was preparing these episodes. As you read the reports about NDE than everyone sees a bright light in which shadows are moving, ancestors mostly, but angels too.
This shining bardo doesn't stay forever. Sometimes it takes / endures seven days, but it can also take seven weeks.
The next bardo is called the bardo of becoming. The consciousness / mind finds a new place, in a new body and a new life gets started. This we can also see in the story of Easter. After three days, and that’s very fast as we compare this with the Tibetan idea about living and dying, Jesus rises from the grave. He conquered dead and became an enlightened being who walks a short time on this earth and then rises to Heaven making the Holy Spirit, a kind of reborn energy, available to the world. With His resurrection and entering Heaven He broke the Circle of Bardo, as did Buddha.
In Tibetan tradition of bardo the songs from The Book of the Dead were recited by the monks to lead the spirit. Rinpoche goes further in this idea and describes his ideas in The Tibetan Book of Living and Dying. In his book he sees life as it is as a bardo. The bardo between birth and the moment of dying, life in itself is a transition. It's a time in which we learn, contemplate, meditate and prepare on death. (Source: Carpe Diem Theme Week 1, episode 3; February 17th 2016)
New Life ... the resurrection of the Lord proves that a new life can be established, not by rising from the death, but by finding your path to spiritual growth ... that can bring you New Life too.
Easter is mostly associated with the color yellow and with tulips and daffodils ... and maybe that's correct ... in my opinion, yellow stands for the color of the sun, and the sun gives us new life, new energy ...
Well ... it has become a (to) long episode I think, but it was really a joy to create this episode for you and I hope it will inspire you to create haiku, tanka or other Japanese poetry form.
resurrection
part of my being is dying
finally found myself
the final frontier
to become newly born -
conquering death
© Chèvrefeuille
You can start responding next Sunday April 16th at 7.00 PM (CET). You can respond until April 21st at noon (CET). So you have a whole weekend to meditate and contemplate about this episode of Namasté, the Spiritual Way. I will (try to) publish our new episode, shawl, later next Sunday around 7.00 PM (CET).
!! Don't forget ... Saturday April 15th 10.00 PM (CET) our Summer Retreat 2017 (unconditional) love will start. 30 Days writing haiku and tanka themed "unconditional love" !!
By Chèvrefeuille - April 14, 2017